Greetings eRepublikians;
You may remeber my article "Where shall I put my companies!?" which is published around 2 years ago right before the new bonuses became available. At that time, If you put your factories based on my list, you've probably be satisfied with the result. the only problem on that list is USA and that's why I said probably! they're now wiped and I don't think they'll be back on the map soon.
Anyway, the new update for "relocating companies" will be added to eRepublik on day 3926 and then you'll be able to move your holdings and inside factories without any costs; so, you're most likely seeking for a safe and high productive region to put 'em there, that's why I've decided to publish a new article to help you out on this issue.

This is the list of all full bonus regions in each 4 industries. In order to put a reasonable ranking on it , I've added a new tab as region's stability; it applies from day 3145 (when new bonuses became available) till now; E.g. If a region is not occupied in these 780 days , its stability will be 100% and so on.

Note: As the determination of a region wouldn't be reset with liberation, most colonies gets high determination and will probably be released after this update; so I assume all regions for their "Original" owners, not for the occupiers. 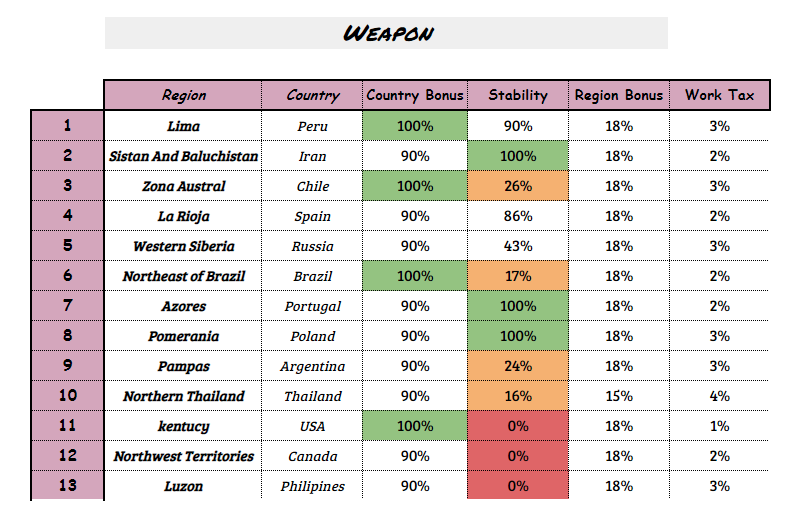 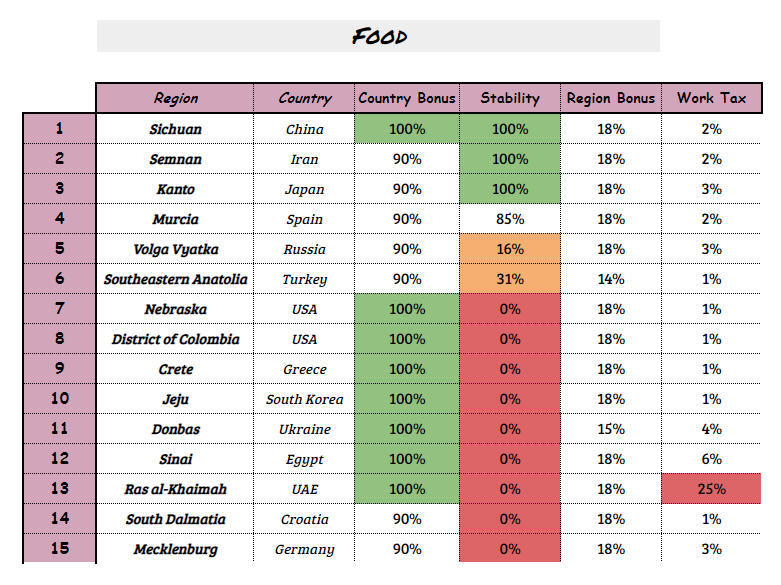 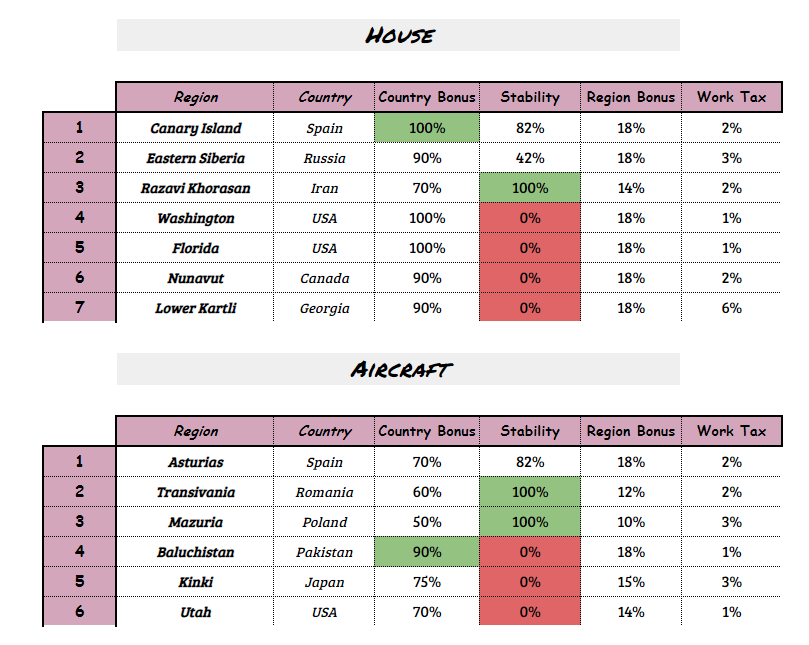 well, you probably have various factories and are looking for a region in which you can put these different companies; so, let's take a look at this list which ranks countries based on these factors : Original Bonus, Bonus Stability and the Tax you should pay.

Note: As you can work as manager only in Food and Weapon industries, it's better to locate these 2 kinds of factories in a same region in order to minimize the travel costs of moving between your holdings.


*** Some facts and [possible] military moves

Romania loses its Rubber and house bonuses in Georgia and for keeping their privilege, they strongly need an alternative; it seems they will rotate Georgia (and even Ukraine's food bonus) with Russia and take their needed bonuses from Russian lands as Canada has already ASed Russia for this purpose.

Serbia will lose most of its bonuses as they're not located in core. I don't know what they will exactly do to recover them but one choice is go through Greece, Egypt and Saudi Arabia. Or they have option to go for Hungary and its former colonies.

Although Greece is wiped for a long time, lately they've covered this loss with opening an all time epic TW with Croatia. Now, they have the chance to get rid of Romanians' occupation and face a less strong enemy like MKD but their bonuses are attractive for others as well.

Croatia is one of the countries who will come out of Serbia's empire soon. They have opportunity to become full bonus in both food and weapon industries as they're about to rent Venezuela's Rubber.

As expected, Slovenia was not strong enough to keep Hungry wiped and Huns retrieved their core. on the other hand, Romania can not enter to those regions easily as the dets are significant for them; so if Serbia won't come to Huns, they can build their former strength again.

Spain, Russia and Iran will rather be the winners of this update as they have most of the essential bonuses in their own cores. In order to become full bonuses in house, weapon and foo😛 Spain needs to rent/occupy 2 very common bonuses, Russia needs 3 and Iran wants 2 of them plus one Granite.

Of course, with owning 51 regions USA could've become the only unrivaled empire of eWorld on this update; but their failure in foreign policy, left no friends for them and it seems countries inside there can easily rotate the region with each other and stay there for long time if only their greediness won't make a war between themselves.

South American countries are almost full in Weapon ; among them, Argentina and Chile can have an acceptable food bonus as well via renting.

Turkey has the chance to become full bonus in Weapon as they rule over Philippines and can rent rubber out of there. they also have good food bonus in their core.

Pakistan, the country with the highest Aircraft bonus will come out of Iran's occupations with this determination ; but because this industry is withdrawn by admins, it may not have so many lovers.

Don't Forget, you have 30 days to move your companies , so don't be panic and wait for countries to make their move first. I may write down another article next week and update my list based on their moves, as well 😉

Relocating Companies and Some debates

o/
Iran Have Best Original Bonus for food and weapon

Kentucky has the best weapon bonuses in USA

The region will most likely be under constant rotation, this is the worst possible location.

No, it was written 'Washington' before Mohammadh77 corrected it.
I merely pinpoint typing mistakes.

Why is it bad that the region is under constant rotation? I mean the resources are in the region, right?

- Capital may not be connected to the region giving a big bonus penalty
- Depending on CS, possible embargo
- There is still one resource missing, that may or may not be present

With just one or two rental contract Iran will be best for everyone in my opinion.(which will happen of course)

the picture wont open for me

Good job man nice reading
Usa got wiped at a really bad time and even deter update won't help them ...

Serbia can get bonuses but it will be hard and reasky for them .

Iran seems to be a safe country to relocate with good amount of stable food, weapon and house bonus

And you are more than welcome to join us😘

Giving bonuses in core regions to Romania in exchange for bonuses abroad is a very bad decision by Russia, in a long term.

We're not giving away any of our bonuses.

So, you wont give your bonus regions in exchange for bonus regiins in Ukraine and Georgia?

That's only the assumption of mohammadh77. U could contact our ally Romania about their plans directly.

It's important to know this info if you want to relocate holding in Russia. So, the message is: look for other places. Thank you!

KE LE, there are some clarifications [here in the article + you can now be sure from the map that no core regions with bonuses are transferred.

Russia would have full sets in weap, food and house and have WorkTax 2%, so welcome to Russia!

Spain has the same, with a 2% alredy active since months and even aircraft bonuses (just in case admins ever do anything with those weapons xD).