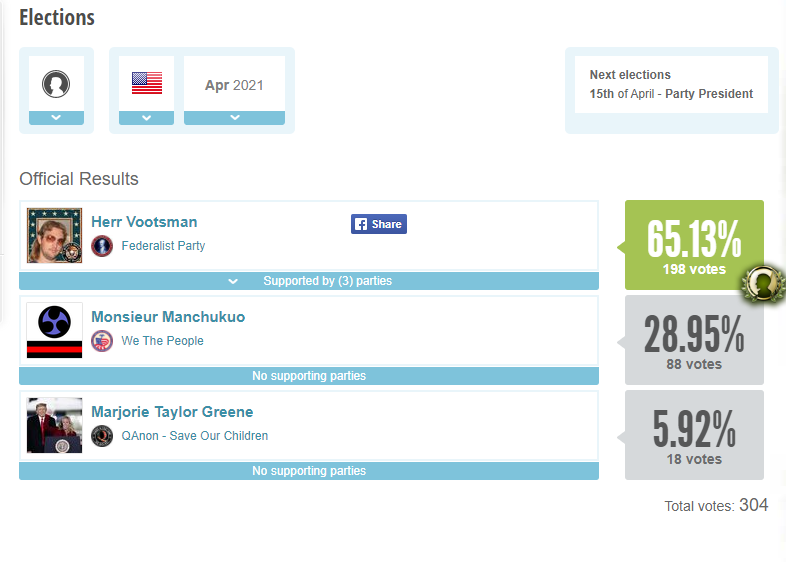 In a show of force altruism, a gang group of mulleted mafia members individuals stood outside the polling places on Monday carrying high-calibre weapons non-lethal security devices, an act which constituted voter intimidation protection in order to ensure the correct outcome a happy and safe voting experience.

The result of this was a Voots landslide. Long live the King!

I slowly opened the door, knowing I couldn’t avoid the inevitable any longer. It creaked so loudly and I wondered if I could still possibly escape, but I knew I’d have to take off my heels to run.

“Beary!! What is taking you so long?” Gnilraps barked. “We don’t have all day!”

“Ok. Back to business. We have finally made it into the top 5 party position. It’s nice to see people joining us!” DeepChill spoke in a very calm manner, much unlike Gnilraps, who was always yelling at someone. Sometimes I think he yells at no one, just because he likes yelling so much. That, and he always smelled like cigars. I mean, don’t get me wrong, I love a good cigar, but the yelling was stressing me out.

“You already know!” Gnilraps was back to yelling. Maybe he just needed a hug. I walked over and put my arms out to hug him and he just turned and started yelling at a plant on the windowsill.

Wilker appeared seemingly from thin air, along with a cool breeze smelling slightly of Axe body spray. I never understood how he did that, but I took a deep breath in and smiled. In the corner, Gnilraps was still yelling at a plant because it wasn’t growing fast enough.

“Let’s get outta here.” Wilker whispered, as he whisked me out of the room. We walked down the hall and began discussing the latest ideas for segments in the WHPR.

“So… ummmm… yeah… We should get down to business,” I said, with a small smile on my face.

“Right… We have work to do… So… ummmm… YES… King Taco. Let’s talk about him. He has gotten the Food for Flight page up and running again. We should get that information out to everyone so that they can apply.”

I started taking notes immediately, although writing without looking at the paper can be quite messy. I needed to get some things written so they didn’t fire me. I didn’t want to lose this job, and I was still pretty new around here.

“Ok. I’ll put together some information about FFF. What do you think is most important for people to know?”

“Well, hopefully, by now, all the old farts know which website to go to.”

“But just in case they don’t, give them the link for the DOI website.”

I surmised that the younger “farts” were the ones who would need the food more than the older ones, so the link would definitely help. Just thinking about free food was making me hungry, but I didn’t know how much more Wilker wanted to talk about. I quickly shoved an energy bar in my mouth and chewed furiously. I had quite a few of those stocked away for moments just like these.

“Ok, so LB, can you write something about what’s happening in the war efforts?”

I shrugged my shoulders and laughed.

It was probably not the best joke, but I needed some humor for a brief moment.

“Yeah, I’m definitely not the right person to do that… Let’s go find Gnil. He’s much more qualified to write about the war. I barely know what’s happening most days. ”

We both chuckled, knowing I was right about that.

We walked back down the hallway and into the room to find Gnil sitting in a huge leather chair, smoking his cigar: his voice completely hoarse from all the yelling. I decided it was time for me to go. I turned to blow a kiss goodbye. Gnil growled in response. Wilker winked. DeepChill tipped his hat and said “ma’am.” The multifarious responses caused a smile to creep on my lips as I sauntered out the door.

Unless you have been living under a rock for the past couple weeks you already know that we are in the process of getting wiped by primarily Croatia. With some help from Hungary, Chile, and France.

We are down to 10 regions, and it remains to be seen just how far Croatia and friends will take this invasion of our homeland. We are expecting the worst, so a total wipe. The question is, how long will we be forcibly occupied? Unknown, but our expectations are for no more than a few weeks.

While there is no doubt that the eUSA has fought valiantly these pass weeks, we have been unable to stop the juggernaut that is Croatia. At times we have even been thwarted by our own citizens starting unauthorized RWs that interfered with strategy that was in play. So please don’t support any unauthorized RWs!

We have a new Secretary of Defense, Groot of Cascadia, who is working on strategy for how best to proceed military under this occupation. Many players have joined the effort in coordinating our war efforts and we salute them. o7 And the guy busier than a one legged man in an ass kicking contest CP Herr Vootsman, has been leading the way in our war efforts.

The Vootsman Administration is currently working on plans to deal with the problem of so many of our citizens not being able to WAM. And the country should see movement on this issue sooner rather than later as we know this a huge problem.

ALL CITIZENS NEED TO BE PAYING ATTENTION TO THE NATIONAL FEED AND THE DoD NEWSPAPER FOR CURRENT PRIORITY BATTLES, CHANGES IN PRIORITIES, APPROVED RWs, AND DAILY BATTLE ORDERS.

It’s hard to live in eUSA and not be aware that our government wants to help you rank up in Air Combat. (Reminder: Sign Up for GIMP! and make sure you have a FFF account.)

The Vootsman administration would like to recognize and celebrate those citizens who have increased their rank during the previous week. We begin our recognitions at Chief Master Sergeant* because that is where the 100% bonus kicks in. Congratulations to all those who have ranked up but not yet made CMS*!

Special honors go to Elena Claudia who, as you will see below, cleared 4 ranks!


Remember, the most efficient way to build your citizen’s value on the battlefield is to spend your energy fighting in air combat battles (unless you have a significantly high strength, and if that’s you then you don’t need anyone telling you what to do!).

"Unknown, but our expectations are for no more than a few weeks."

Was it "bad joke day" when you've written this??
Why are you so dishonest to the public, to our community.

"We have a new Secretary of Defense, Groot of Cascadia"

Joke of the day!

Excellent appointment! That makes it most unlikely that the US will get any kind of a deal.