I was amazed that such a huge change was introduced without any announcement from Plato or an explanation for how to interpret the new GUI. If I missed it, someone link the announcement in the comments below and I'll update this article.

What follows is therefore my take on things, and I welcome corrections if I’m wrong. 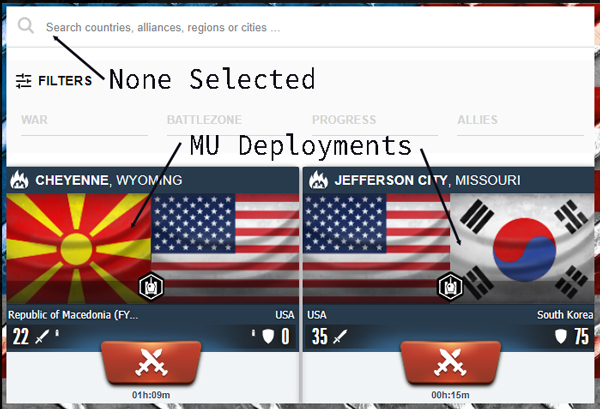 Let’s start with the “default” - all filters removed.

Starting from the top left, your Military Unit’s Deployments will appear first. After those, Campaigns populate beginning with the most advanced campaign and ending with the campaigns most recently begun.

Important note: if you have any kills in any other current mini-battles, those campaigns will appear first, followed by your MU Deployments.

This means if all you want is your 25 kills for your Daily Order, you can pick the top-left-most battle and hit there.

Let’s take a closer look at one of those battle blocks. 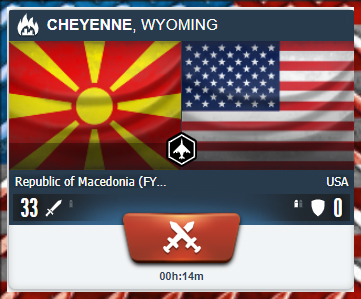 You can see right from the center of the block that the current round is an Air Combat round. If you are a new citizen, you probably want to look for this. Making a new citizen battlefield-relevant is an Aircraft-only proposition. As you can see in Image 1, you can also tell if it is a Ground Combat round.

The top-left icon is indicative of a Direct War, meaning the two nations in this conflict share a geopolitical border which is in dispute. Here are the other types of icons you may see there:

An Airstrike is a battle between two nations which do not share a border.

A Resistance War is a battle organized from within a conquered region intended to return that region to its default sovereignty.

A Civil War pertains to the Dictatorship mechanics which change the governmental structure of the warring nation.

If you are looking to avoid travel expense, you should focus on Direct Wars.

Returning to Image 2, you can tell by the sword icon (and the contrasting shield icon) that Republic of Macendonia is the aggressor in this Campaign. (I also notice that the default position for aggressor is the left, so I wonder why they included this icon).

Aside from the remaining obvious elements, there is one more useful piece of information, the question of those small icons that look like little rifle rounds. 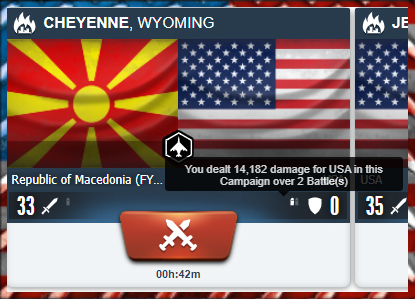 In Image 4, I am hovering my cursor over those small icons next to the shield icon for eUSA. As you can see, there are two on the eUSA side and one on the Republik of Macedonia side. The bright white icon indicates I have contributed damage in the current mini-battle. The greyed-out icon indicates I have contributed damage in a previous mini-battle. When I hover over those icons, EREPUBLIK informs me how much damage I’ve done over how many battles. This mechanic adds Air and Ground Combat together.

As mentioned in the discussion following Image 3, these four filters help you highlight Campaign types. I don’t see much use for them for the average EREPUBLIK citizen. Let’s move on.

So also, the Battlezone Filters have already been mentioned. These, however, may be far more useful to a Citizen. New players should be encouraged to seek out Aircraft Battles. Much has been written about pursuing this strategy for new citizen growth. When one of these filters is selected, the Default rules apply to the ordering of Campaigns with the non-selected Campaign types removed from the list.

Cold Battles are those minibattles wherein the total influence (damage) done by all participants is not sufficient to create a Full Scale Battle. Just think of this as an ordinary battle.

Full Scale Battles are those wherein enough damage has been done in your division to trigger the Full Scale mechanics. This means that if this battle is very closely contested, there is a chance to receive double prestige points in that minibattle so long as the mini-battle remains close.

Epic Battles have seen enough damage that for the remainder of that mini-battle all prestige points earned are doubled.

*I have not yet observed the new Wars page during an Epic Battle. When I see one, I’ll update this if there is any impact to the GUI.

*I do not know how Maverick Packs impact these mechanics. Perhaps someone will comment below and I can edit this section.

Waiting is a good filter to select if you are planning to make a charge for a Battle Hero (or Sky Hero) medal. This filters out ongoing mini-battles so that you can sit and wait for the first second of a new round. If you are savvy, you can use this filter to increase your Gold income by earning more medals. Please note that sometimes a mini-battle is in “waiting” mode in your division while other divisions are still fighting. If you wait, eventually the 5-minute timer will begin and your new round is about to begin.

Fresh Battles are those in the first 30 minutes.

Early Battles are those between 30 and 60 minutes in.

Late Battles are those at 60+ minutes.

Most citizens will not have much use for these last three filters. 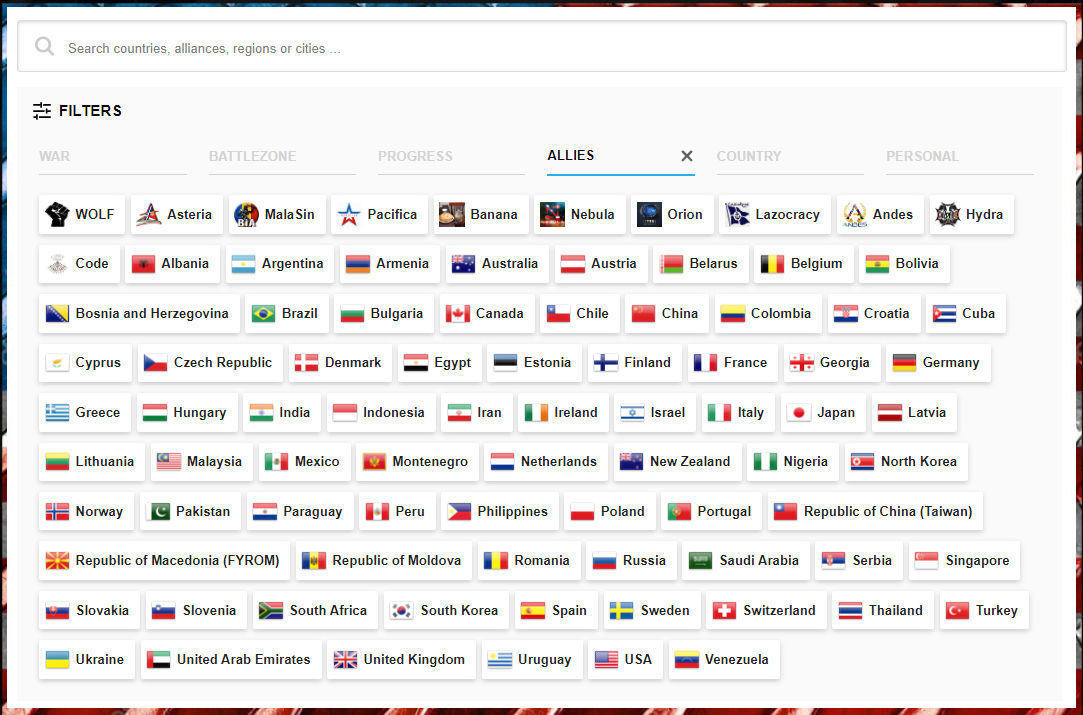 There also does not appear to be any rhyme or reason to the organization of the Alliance filters. (The actual ordering is based on the age of the “alliance container” itself ingame. Pretty worthless!) As you can see, WOLF appears first, despite the fact that it is an alliance of one nation, eSaudia Arabia! Asteria appears second despite the fact that eUSA is not a member of Asteria.

Following the alliance filters are an alphabetical listing of all national filters. If you are pursuing your Mercenary Medal, this may be useful, however there is a better filter for that under Personal Filters. Notice that clicking eUSA under “Allies” brings up any battles that include eUSA + any nations with which eUSA has a Mutual Protection Pact. eUSA currently has none.

I don’t think the average citizen will have much use for the Allies filters unless his/her nation is engaged in heated war. 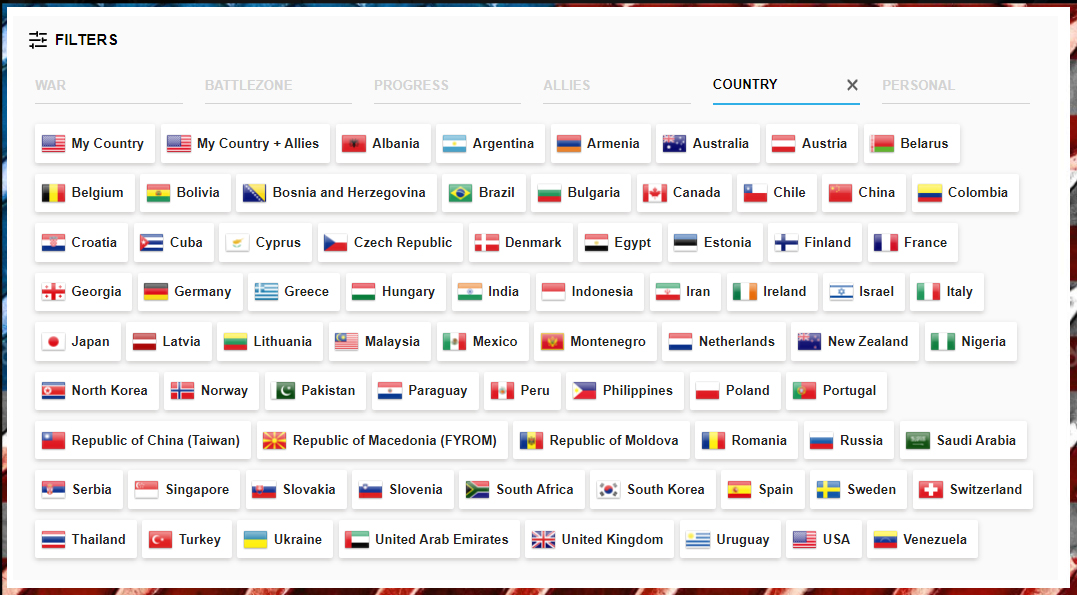 The My Contributions filter is a great way to keep track of progress if you are baby-sitting several battles in hope of earning some medals. However, this filter is mostly useless if you understand the default dynamics discussed under Image 1.

The same is true for the Daily Order and True Patriot Medal filters. These are redundant mechanics. However your personal preference may lead you to use these self-explanatory filters.

Combat Orders are a reference to a mechanic that existed in the game before I was eBorn. Unless Plato re-activates that mechanic, this is not a filter, it is a firewall.

But now we get to the meat and potatoes. New Citizens should learn how to use the Mercenary Medal and Freedom Fighter Medal filters. Let’s look at them.

Mercenary Medals are a good way to get more out of your daily activities with just a little bit of organization. 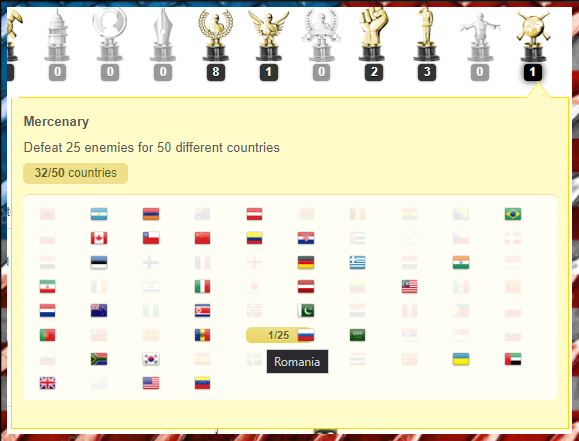 In Image 13, I am hovering my cursor over the right-most trophy, the Mercenary Medal award. The yellow box appears when you hover. Within that box you can see that I have completed 25 kills for 32 countries, and the bright flags indicate which ones I’ve done. More information can be discovered by further hovering over the dim flags. Thus I have 1 kill for eRomania so far.

It is important that you know these hover techniques because the Mercenary Medal filter does not indicate on which side you need to fight in order to progress towards your medal. So be prepared to switch back and forth between tabs. 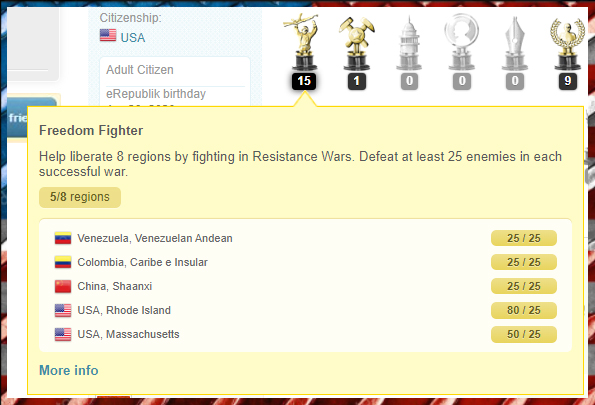 Using the same hover technique, you can see that I have made progress on my 16th Freedom Fighter award. This is also worth 1,000 cc. They also come more quickly than Mercenary Medals, so this is your primary focus for farming Gold if you are a new citizen!

Rather than explain the mechanics of the Freedom Fighter medal, I’ll simply link you to the wiki.

Now let’s talk about how to use this filter to your maximum benefit. 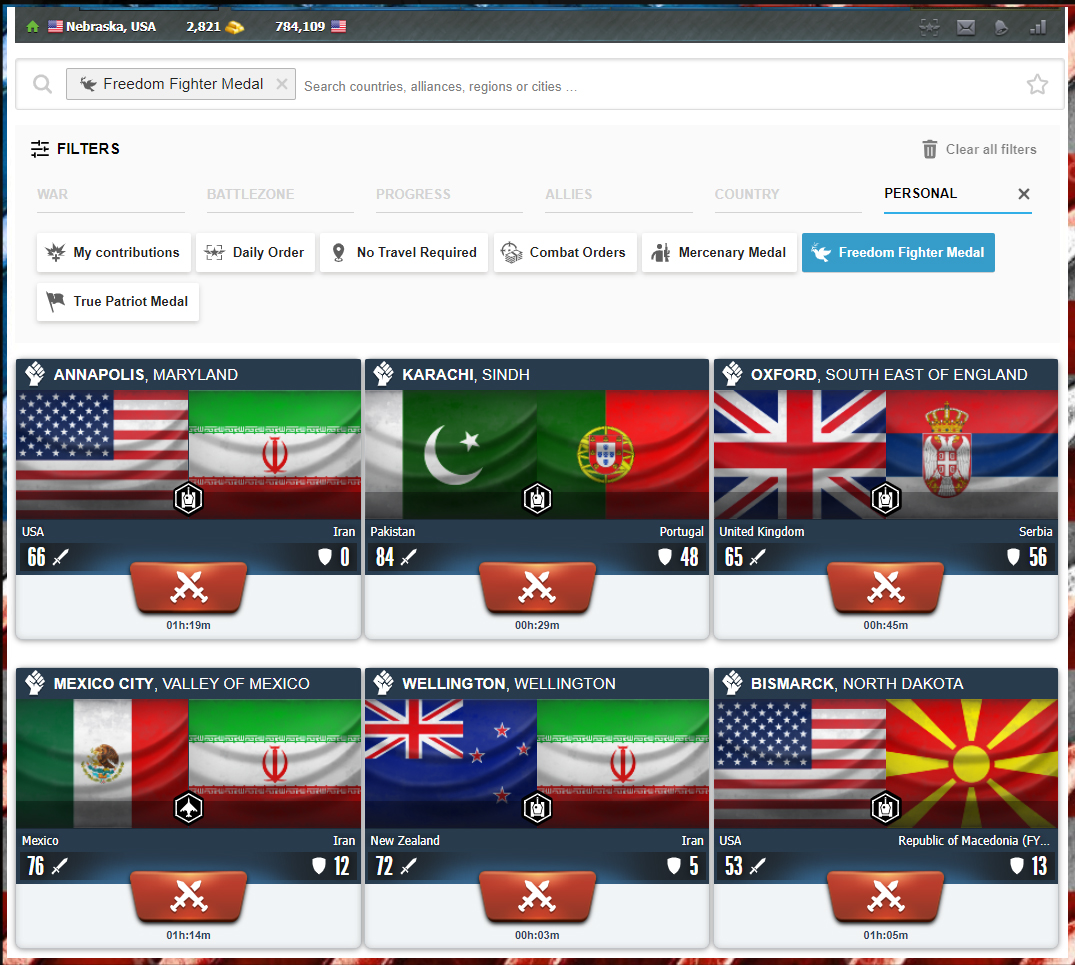 With this filter activated, notice that every battle indicated is a Resistance War. If you are chasing Freedom Fighter Awards, always pick the aggressor as explained under Image 3. ONLY choose a campaign wherein the aggressor seems extremely likely to win. In Image 14, OXFORD is a bad choice. The others look safe.


Back to Image 14, I am located in eUSA. I must travel to pursue any of those Freedom Fighter battles. To fight in ANNAPOLIS, I must travel to Maryland, Iran. BISMARK equires me travel to Republik of Macedonia.

Notice how Iran is currently losing three Resistance wars. This is a Freedom Fighter’s goldmine, as I can accumulate kills in all three of those RW’s with only two moves, one to Iran, then back to my Residence. (This is at least 40 cc savings.)

In this case, I moved to Iran, knocked off 25 kills for eUSA in ANNAPOLIS, 25 for eMexico in MEXICO CITY, and 25 for New Zealand in WELLINGTON. (I was also able to score a BH in WELLINGTON!). As long as I selected Iran’s opponent in each of those mini-battles, I was racking up kills for my next Freedom Fighter medal! (Don’t forget to travel back home).

It doesn’t take long to understand that the Freedom Fighter medal offers the best farming income for a new citizen.

Combine your pursuit of Freedom Fighter Gold with an eye on Mercenary Medal Gold as the fastest way to add Gold income through fighting.

Not only is Freedom Fighter Medal farming lucrative, it is also competition free. You win every pursuit!

When you go to the Wars page, your Filters will be set to their previous state. Remember this in case you are switching fight strategies.

Find opportunities to decrease the amount of travel you do by combining tasks.

Hierarchy of Importance, Daily Order:
+ Is one of your Deployments
+ Is Epic
+ Is Air Combat


Hierarchy of Importance, Gold Income
+ Is a "winning" Resistance War
+ Is being lost by a country also losing other Resistance Wars
+ Is an Aircraft Battle

Have fun in eRepublik!

Remember, publishing your newspaper is free and a lot more fun than clicking a fight button, so give it a try.

I am available for hire to do your graphics

Good stuff! Thanks for doing this!

Thanks! Somebody made me a fabulous uniform! 😍

Not much I can say except...

P.S. Check out my article - cos there is also explained how to add custom Filtering (Presets) that will make all of this even easier 😉

+ Curlybear made a .js that fixes UI to look more like old Wars UI 😉

Keep up the great work, is very nice to see new player being active in eMedia like you are 😉

Great stuff.
Sadly I am not allowed to double subscribe.

such a kind word. thank you

This is article is soooo great. Thanks.

I hadn't noticed the bullets! 😮

neither did I until I wrote this