Greetings, fellow Iranians and citizens of the world!

an article from good old Janty F - what a surprise. Is it something grand? Some surprising announcement? Some political scheme or satire? Or tedious statistics article about how economics is wrong again? Naaaaah... can't be bothered with that, have better things to do and nobody would want that anyway. But something good happened today, which requires me to put all the extra effort to write article anyway 😛 .

Several years ago, I sweared I won't leave this game, until I hit Legendary rank (because I thought I will never be able to reach it, so I will stay here forever and inherit all your riches and nations, bwahahahaha!). Well... today though, impossible happened, and I am one step closer to the Legendary goal 🙂 . And only one final step remains!!! New Titan*** is in the house! 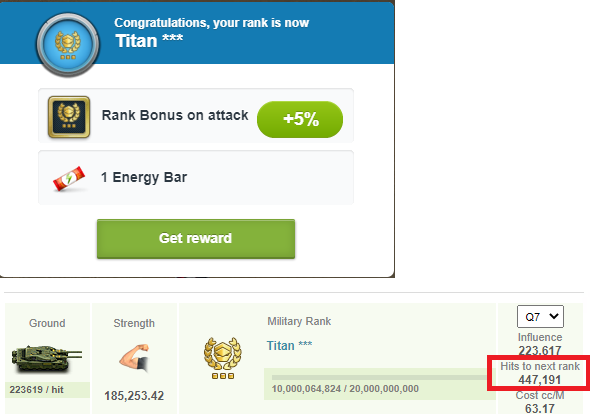 It took 10 whole years to get here, so now I assume I will be hitting the Legendary rank (and hopeful retirement) before the end of 2030. Would be cool to hit it like... next year or something, I mean, it's "just 450k hits away", and other people did it in a year too... but knowing my luck and dedication, 2030 seems like much more realistic prediction. It's not like I know, where I want to collect the Legend anyway, so might as well take some time with it 🙂 .

Where you can see the hits you need for the next rank?

I believe it comes from the "tools" thingie, if you know, what I mean 🙂 .

Let's hope the game will not suffer from more degradation until that too 😃 .

Congratulations! If the game lives long for you to make use of the new rank 🙂

After today's game performance, I better hurry up a bit more, the game clock is ticking 😃 .

The CEO of Home Food Company and headwriter of Rambling Gazette shall never eDie!

We will just appoint a new CO then!

Btw. you think Dutch Legendary rank will be worth something in 10 years? Asking for a friend 😇 😛 .

The economic empire of NL has to be protected!

And you think one more weak Legend could help there 😮 ?