• by Irish Department of Defence

An out of normal rotation update as our new training war partners Canada and Poland settle into Ireland and we finish moving not only S.Africa and RoC around to reset determinations but also ourselves as we moved from Aland Islands to Eastern Finland. 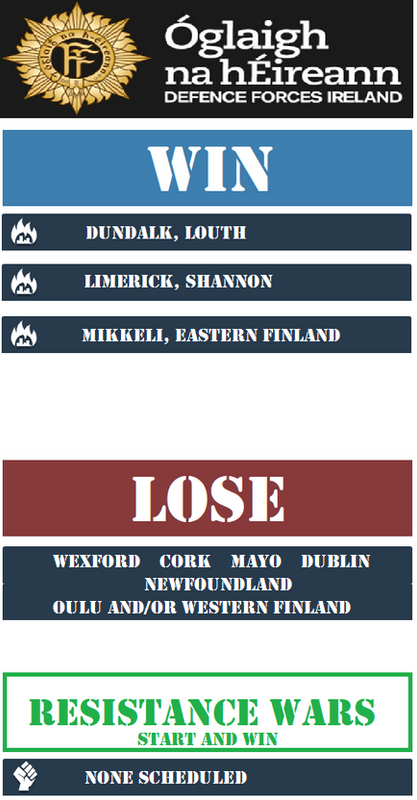 The other reason for the update is ofc to inform you of actions around Northern Ireland!

On the 20th January 2021 we signed the Bushmills Agreement with the UK and we were informed that they had re-certified the contract for another month on 19 'Ayes' to 1 'Nay'.

Despite this apparent commitment to re-establishing cordial relations and restocking their trust account with Ireland it was noticed that there was a noticeable uptick in support for a RW in Northern Ireland from UK players.

On remarking on this to the UK government they responded that they did not support a RW and intended to honour our agreement.

The RW was started


Since the start of the RW the UK has made no attempt to undo the damage of it's citizens fighting contrary to our up to date national orders as requested by the treaty and the UK fighters contain at least 10 congressmembers and the MoFA.

In addition they have issued orders to UK fighters that they were actually seeking to win in Northern Ireland. 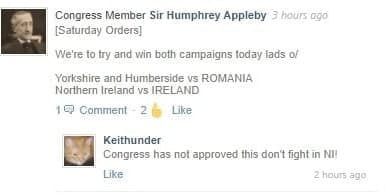 Therefore having been in such heavy and flagrant breach of our agreement, we can only conclude that the UK has decided to abrogate their responsibilities and go back on their sworn word.

Any agreements between Ireland and the oath breakers across the Irish Sea are now null and void.

Junior did it again.

Btw, which part of the treaty was actually broken? I'm not quite sure, trying to find out. I'm one of the people that supported the RW, but I neither care about the government or listen to it.... And I don't think Appleby is in the government.

In seriousness it was repeated and uninterrupted or managed breaches of 3b by the UK followed by breach of 3a by your MoFA.

3a in collation with other sources indicated that Jimmy was no longer in control and that UK was quite intent on trying to renege on its commitments.

Where is Paul Revere when ya need him?

there will be no ireland to have tws, so this is irrelevant

A fair degree of irrelevance is always implied - Should be in the Terms of Service (not that they amount oo much!)

boo hoo what are we gonna do now...

So we need to win North irland?

You should wipe the eUK

Can the UK not wipe itself? - Must be awfully crusty down there.

The sheer hypocrisy of Alfa complaining about people violating the UK-Ireland treaty is spectacular. Maybe if you didn't break the treaty every couple of days, the eUK government would have an easier time convincing people to follow the treaty themselves.

1. I didn't write the article.
2. Any damage I did was as per Article 3 and all covered. Not my fault if UKers smash the bars over to try steal SH's or decide D4 round 14 of a TW is the time to undo a requested recovery and lose a TW.

Well, at the very least I shall concede that you didn't write the article, my bad. For some reason I was under the impression that you were the de jure MoD, not just de facto.

https://i.postimg.cc/nL0ywM3K/roryidiot.png is an example of a UKer fighting like a chump, against his nations own orders and then trying to blame me for what he did.

Is this the end? Apparently not... Fenoglioteam must be turning in his egrave. The boycott led by his fellow cheaters lasted about a day.

And it took UK 5 days of Jiminy inactivity to be locked back to the cage.

What happened to Ireland? It seems like the Irish governments sole purpose now is to act as the admin department for Alfa's medal stealing.

Seems to you maybe.

Alfa doesn't need to steal medals, he has plenty.

Here is three he definitely stole...