Greetings! In the forgotten Academy of Woods by yoro, a research and analysis was performed on the events from 25th of February this year. A description of the "Balkan magic" is given and graphical representation of the associated accounts is shown.

A bug that can be classified in Common Vulnerabilities and Exposures (CVE) has happened with the introduction of the deploy button. Typical for major security vulnerabilities a codename is given. This CVE is called "Balkan magic" due to the localized adoption and the great impact it has in battle performance.

With more investigation turned out that any booster was able to push back the deploy progress bar without additional costs. The original theory I came up with is not the answer.
Exploit. The energy consumed in deployment is not affected by a following activation of any booster. It is set at the start. This causes a discrepancy between the energy utilized for dealing higher hit count and the actual energy consumed based on starting setting. In example, 100 energy for 10 hits becomes 100 energy for 50 hits. The boosters become unintended decimator for consumed energy.

The later analysis in this section is a speculation based on the testimonial of a renown hustler, multi and majdramunjak.

The bug is invoked when an Accelerator booster is activated during an ongoing deployment. The booster increases the rate at which the hits are made. This reasonably leads to more hits done in the same time interval. Therefore more hits can be done in the duration of the deployment. In example, 10 hits deployment will become 50 hits deployment with activation of x5 accelerator. No problematic behavior until now. The energy consumed in deployment is calculated based on the amount of energy set by user at the start and the progress bar completion at the moment of end.

Exploit. The energy consumed in deployment is not affected by a following activation of an accelerator booster. This causes a discrepancy between the energy utilized for dealing accelerated hit count and the actual energy consumed based on non-accelerated hit count. In example, 100 energy for 10 hits becomes 100 energy for 50 hits with activation of x5 accelerator. The accelerator booster becomes unintended decimator for consumed energy.

Reason. The cause of this behavior may be explained with classic fight button. The classic fight button had limit of 1 click per second. In order to make the accelerator booster functional in reasonable manner, instead of making the click time limit lower, one click with accelerator resulted in multiple hits instead. On average over many clicks the effect is the same as clicking x-times faster. This multiplier of hits was introduced in deployment with similar intent. But it was not fully accounted for accelerator activation during ongoing deployment. Then the accelerator will just multiply the hits corresponding to 100% deployment completion. For example user X has 7/10 hits done, 70% progress. When user X activates x5 accelerator the deployment will have 7/50 hits done or 14% progress. But user X will use energy for 10 hits, giving actual full deployment progress of 50/10, or 500% for same costs.

Now I present the graphs illustrating the effects of the ongoing investigation on accounts associated with the "Balkan magic". 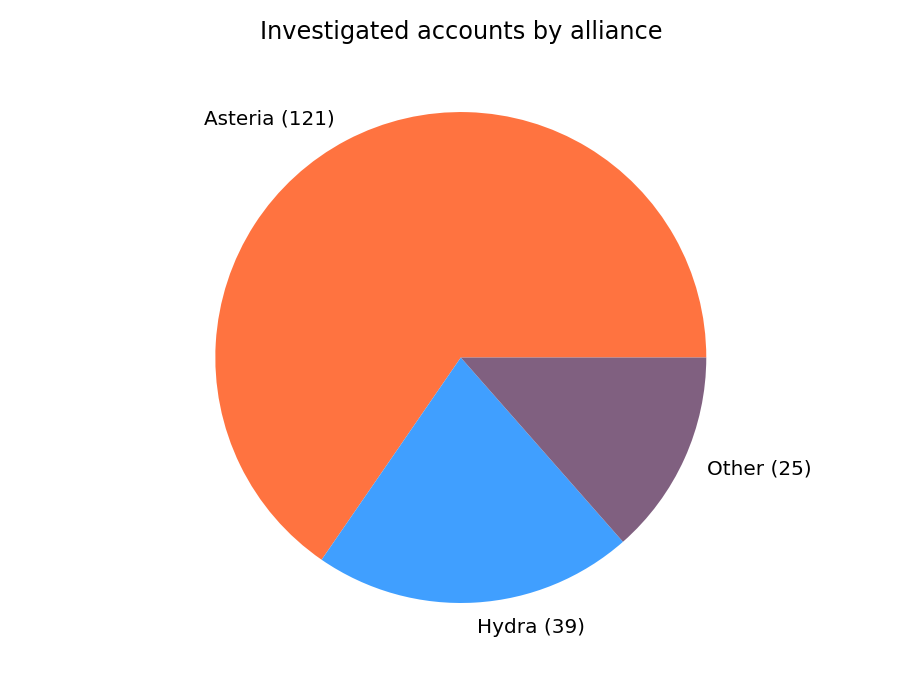 As it was noted, the accounts have strong correlation with certain alliance sides: Asteria and Hydra. Nearly all Hydra accounts were contributed by N. Macedonia, so more correctly one can say it is 2/3 Asteria and 1/5 N. Macedonia. More information is given when separating accounts by country. 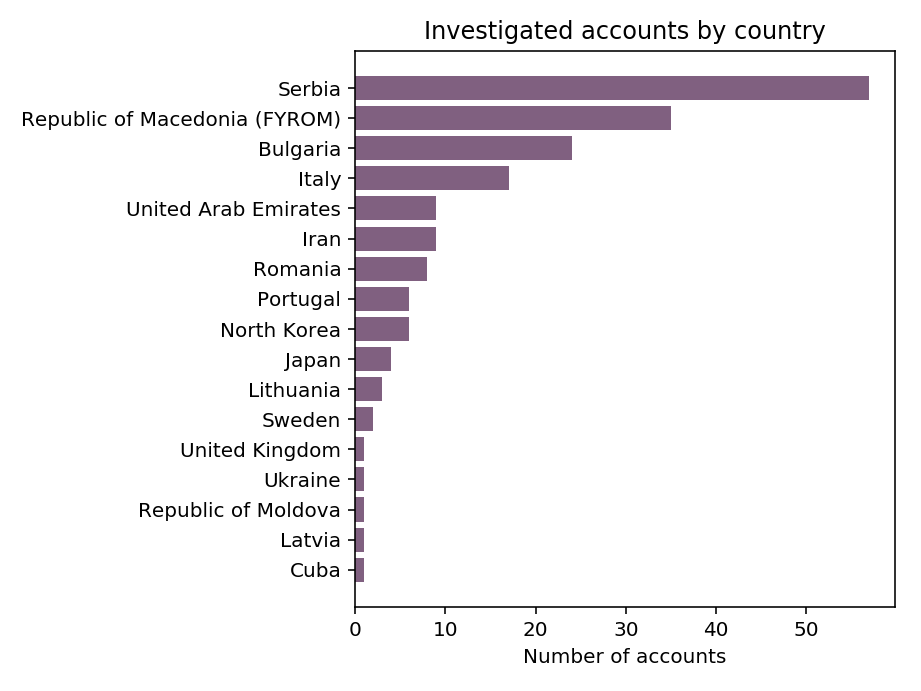 Most banned are from four prominent countries: 59 Serbia, 36 N. Macedonia, 24 Bulgaria and 17 Italy. The rest have less than 10 accounts banned. Most accounts are situated in Balkan states, hence the name "Balkan magic". The main contributors to the count are related in fights against the so called "trains" in their core regions at the time of exploit. Little number of other sides are involved. 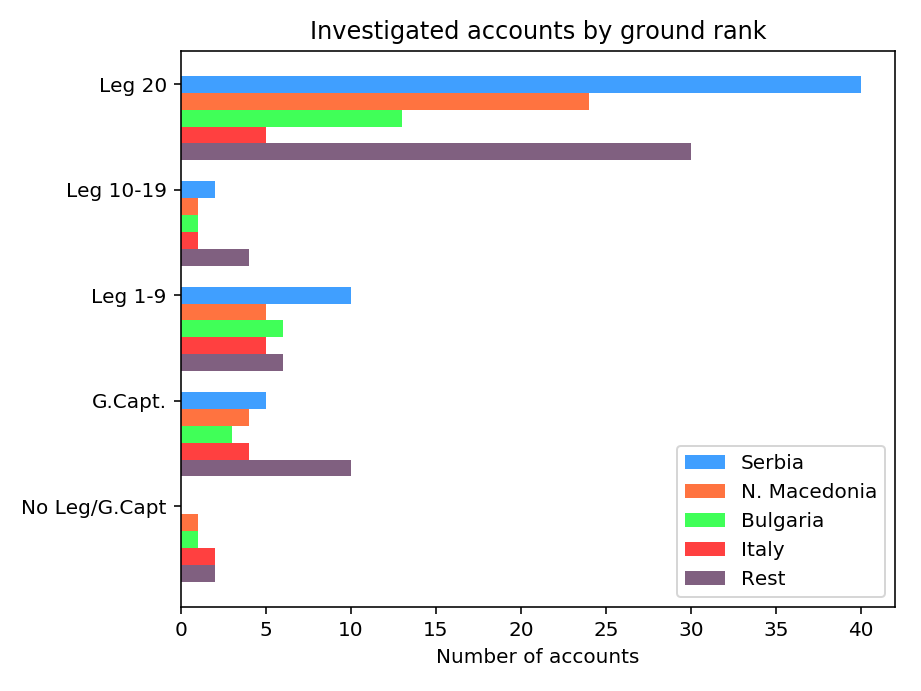 From the figure it is clear that most account banned are very highly developed. Top 4 countries are plotted separately. Significant losses of war power by Legend XX banned are visible in Serbia, N. Macedonia and Bulgaria. Other countries have also lost mostly Legend XX accounts. There is a small number of low legends and similar count of air fighters (probably not a legend because of strength). The fraction of not highly active or developed accounts is insignificant. 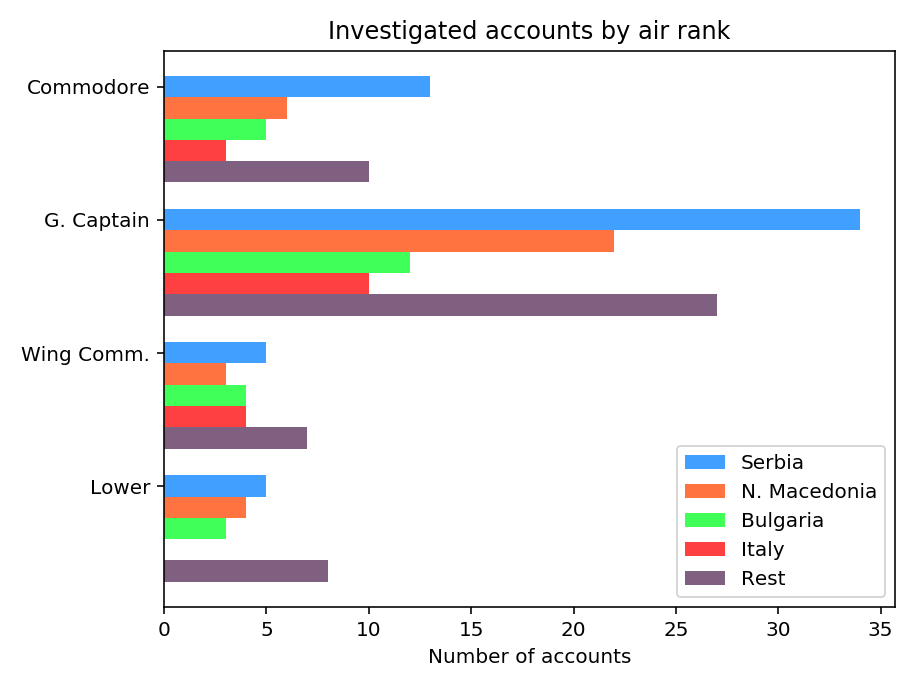 This is a detailed plot of the air rank distribution among the banned. There are plenty above Air Commodore and most have achieved Group Captain rank. The air force of the affected countries has noticeable drop. It is not as severe as ground, because crowd fight is still present in air battles. 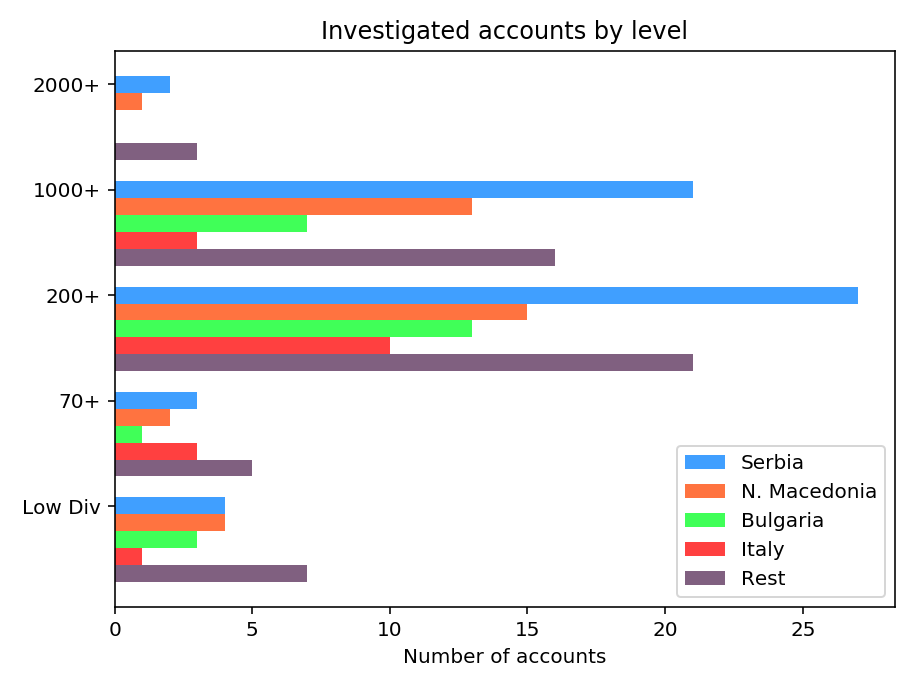 Finally the account level statistics are viewed. Nearly all accounts are D4, but is is overall trend since the migration to air battles and Maverick pack introduction. There is a high portion of gargantuan accounts above level 1000 and most have already passed level 200. There is also a small count of low level accounts in D1-D3. Their number is low, but the effect in those divisions will be great because of the small number of players in same divisions. Also they are crucial for Maverick pack efficiency.

With highly active and developed accounts banned, the affected countries will suffer sudden power balance reversion. Inability to maintain present state of wars is already being accepted. The legitimacy of the bans are still in question, because in some cases the high activity can lead to unintended and occasional trigger of the exploit. Also somewhat inactive accounts are also put in the large count. The pack use will experience a drop since active account are also most likely pack users. Finally, admins have stated that the list may not be complete. The investigation is ongoing.

Finally, thanks to Master_rg for making the ban tables.

by the way this is only for account banned on 25th Feb with Temp ban.

It is exactly what I predicted in my post (the most affected are those with the greatest power and large alliances: https://www.erepublik.com/es/article/las-pandemias-erepublikanas-2731196/1/20), however, your research lacks rigor and validity, since you mention that the analysis is based on speculation and you do not mention the method of how associate the accounts with Balkan magic.
However, it is very likely that he is right, since the same pattern is repeated every time Plato banns the accounts due to the use of exploits.
Voted.

The speculation part is only with regards to the exploit description. The data and graphs in section Statistics is from selection of the published ban list. It is exact.

Your comment about the behavior of players and admins seems quite on the spot.

Next time beter shear cheat bugs with enemy. So you can have some bans from the other side!

That's a clever strategy. Even better, don't use the cheats, just give them away to enemies and cry to admin later.

Unless this already happened...

That is not entirely correct. According to Serbs ghost booster was also involved in this bug exploit. Without it, deploy was not resetting. But you can ask your cheaters for detailed explanation, they ofc know all about it.
Point is, you couldn't accidentally trigger the bug.

Yeah, I still rely on rumors. I do not have many private contacts with banned players. Yet, if the bug can not be invoked by accident, how was it discovered? Unless there are other implications...