Your dear leader has decided to grace you with his presence today. Can you believe it's been five whole days since the glorious revolution took place and the Chazbeard regime once again seized power for the benefit of our nation?

There have been accusations of corruption and that the government's focus has primarily been on the accumulation of personal wealth. These slanderous allegations are without merit and I will run you through how each ministry has earned every penny of the wealth we have stolen from the treasury!

The purge of dissenters opposed to the regime your beloved government has been going well. Citizens willingly took to the streets at gun point to cheer as their friends and family were summarily executed for even thinking negatively about the government. If you believe a neighbour and/or member of your family is harbouring dark thoughts about the government then contact the Thought Police here. Remember citizens; we live in a happy utopia here and negative thoughts kill puppies which in turn leads to bad things.

Otherwise the Ministry has been keeping a keen eye on the existing Training Wars and informing people of RW times and priority rounds and battles. In particular I would like to thank Generals Christmas, Fraggles and Appleby for getting RWs opened on time and with as many eUKer's opening them as possible.

There was one close shave with us almost losing a battle we were due to win. Of course this is a training war and a loss would have merely meant we went with less battles/medals for that day. A training war is a chance for 'training' though and I must commend the actions of citizens and officials – especially the fine ladies and gentlemen who lurk on the eUK Telegram group – in getting us as organised as possible and the campaign back on track. At present each battle is generating hundreds upon hundreds of gold for eUK citizens and our training war partners, we will try and avoid slip ups as best as possible.

The eUK is often thought of as an inward looking nation with no grasp on the geopolitical climate. To dispel such rumours General Appleby has taken it upon himself to publish a series of guides to...errr...UK citizens! To really broaden our horizons so far he's included General AMD and The Dear Leader.

If you want to get involved send Sir Humphrey Appleby a message. You need to provide a brief biography about yourself in eRepublik and real life and three facts about yourself – one of which is actually a lie – these will then form a competition with a cash prize. (P.S. You don't need to include a real life picture of yourself)

We have an event raging on that has changed the game for the time being. Not only do newer players need a hand getting to grips with this but returning and part-time players likely will too.

In his infinite wisdom General AMD has decided not to publish a guide to energy recovery, aviation, or anything useful to be honest, but instead a guide to The Parrot Fish.

Given that we're an island nation and have more fish regions than tanks I believe his outside the box thinking will serve us well in the long term...even if new players are trying to fight with fish.

General Pauly's investigation into what exactly the department of Home Affairs does is going well according to his latest report.

He can't give me any details through fear of comprising the identity of his informant 'Deep Arse' so as such there is no actual evidence of work. However he has requested an increase of £400,000 to cover expenses which congress has happily passed.

Things appear to be ticking along nicely as always in the Ministry of Finance despite the rising costs of Mad Pauly's investigation.

It's going to be interesting to see what impact the Hot Summer event has on our income come the end of it as prices have dropped massively in some sectors of the market. I have full confidence that General George will secure the maximum return to my pension pot regardless.

Though I hold domestic battle sniping in contempt I take a somewhat hands off approach to it because...well, what can one do other than speak about it? Which – in a rare moment of sobriety – I attempted to do.


Numerous complaints have been made against one citizen in particular which I took note of but thought little else of...until I remembered that his party failed to support me in my unopposed election. 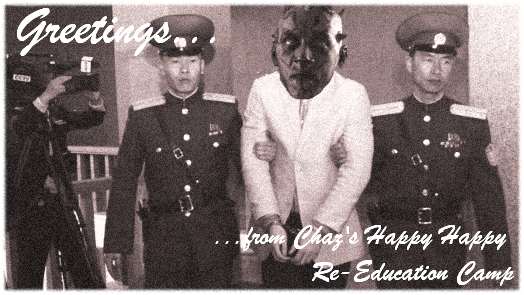 So I sent out the goons recruitment officers to the park where Darth mutilates squirrels and he was soon chained up safely strapped in speeding his way off to the Gulag Happy Happy Fun Time Re-Education Camp where he can relax and look forward to an enjoyable itinerary of: 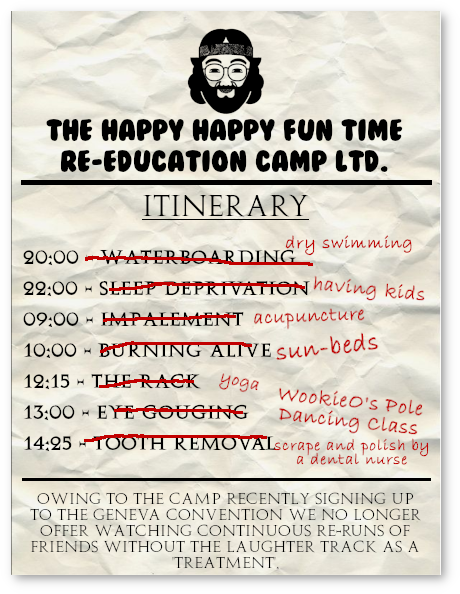 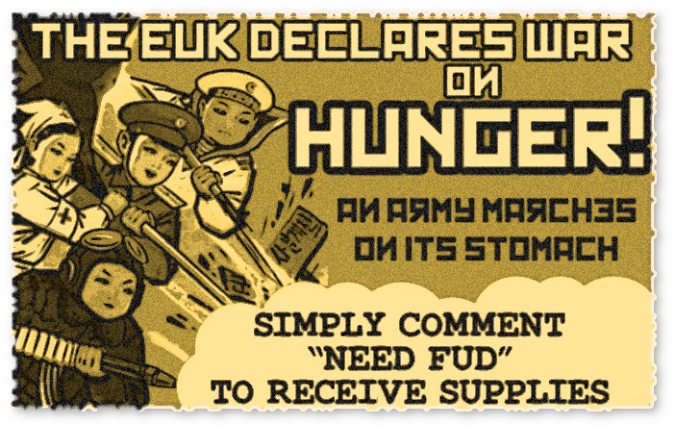 There have been reports in the foreign media that the eUK is starving to death, let me assure you that this is fake neeeewwwssss. Our rice fields have never been more bountiful and the dissenters who work them have been toiling night and day to ensure we have grub.

To help players out through the current Hot Summer event the eUK regime is offering free rations for our fighters. The amount you're entitled to is based on your kills over the past couple of weeks and are as follows:

To apply simply post “NEED FUD” in the comment section and supplies will be sent directly to you. This is open to both ground and air fighters.

If you believe the government has made an error in calculating your kills over the past two weeks then you will be sent to the Happy Happy Fun Time Re-Education Camp.

AVIATION REWARD SCHEME:
At present this is 'on hold' as I run through statistics related to it. I have an idea in mind which I will run past my loyal cabinet and then - assuming they don't want a trip to the Happy Happy Fun Time Re-Education Camp themselves - they will agree to and we will get up and running this week.

On the subject of the cabinet: If you wish to get in hold of a minister then click on their pictures below. The eUK invested a large amount in The National 0.75 Megapixel Camera but unfortunatley we took WookieO's picture first and it broke immediately. We will fix it when we have counterfeited enough foreign currency.

Im going to hazard a guess and assume you're in the uppermost tier! Sent o/

You said the right words but not in the right order. Try again, you're representing the eUK here.

Thank you so much for these detailed update. I am a returning player and this helps me a lot to understand what is going on right in eUK.

If you need a hand with anything just give me a shout or there's always someone on the telegram group who can help out.

And food ye shall have o/

I had plenty of written evidence of my work. Unfortunately I ran out of food so ate the evidence instead. NEED FUD!!!1!1

Ahhh that's a bummer. I'll get congress to wire you some more money, in the mean time here's some kitty fodder o/

Lairs its all Lairs asking them about the sheep and the wallet on the train! Haha un other news Need Fud!

Lairs everywhere! How does a Scotsman notice he's lost his wallet anyway? They never open the bloody things.

Also, is the Happy Happy Fun Time Re-Education Camp open to bookings? I wanna treat the kids to an activity filled holiday where they can try new experiences and it sounds just delightful!

They get free passes if they hold negative thoughts against your glorious government...you wouldn't be harbouring any criminals like that now would you?

Well ain't that a catch 22. We love our Glorious Government for providing such wonderful facilities at the Happy Happy Fun Time Re-Education Camp, but in order to go there we have to hate our Government!

The Year of Fud

Truly fantastic as ever

NEED FUD please and thank you