As the eUK declines back into managed barbarism and traditional '**** you' mentality; el Presidenté has bravely offered to go next...

Same routine, we have his life story and arguably even more devious bits of information to call out.

One of these is a lie.

It's our job to guess which one it is...

Following AMD's suit he has decided to use his own pic for the 'funny' graphic. Glorious 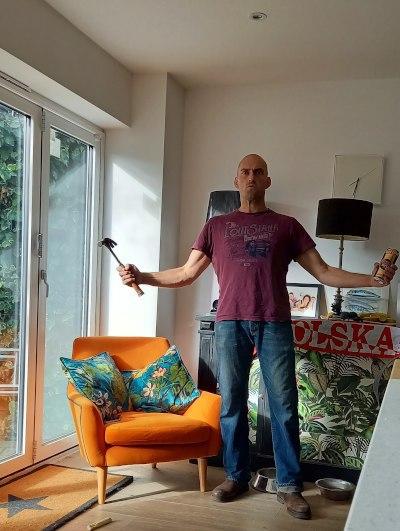 I'm CptChazbeard which was the nickname given to me as leader of 'The Alco-Pirates' back in my early 20s and has kind of stuck with me ever since.

In game I've been CP four times now (7 if we include impeachments) out of 1,273 attempts – there's no accounting for taste – and am generally known for just being some dude who hangs around and writes about things or does MoD related things.

Writing has been my passion in game though my fondest memories have been getting up to general mischief with the likes of the esteemed Royal Army Dental Corps and The Skatalites. I still like to think of it all as harmless fun regardless of how many players had mental breakdowns and were subsequently committed to various lunatic asylums.

I have absolutely no idea why I'm still here, trying to do my bit I suppose.

My name is Charles/Chaz in real life. I'm a 32 year old born in France though I moved to England whilst I was still in diapers and consider myself a Londoner, cor blimey stone the crows guv.

I have a degree in Political Sciences which was totally worth the money as I found myself being a carpenter for years before ending up in my current role as a design consultant to a large architectural firm, who shall remain nameless just in case your house has fallen down and was designed by them. I did for a while work as a political writer before twitter changed the face of journalism so I guess it didn't totally go to waste.

Outside of work I play guitar when I want to annoy my neighbours, rugby when I want to feel a man's sweat on my body and eRepublik when I'm on the cusp of a nervous break down. I enjoy drinking, probably too much, and watching comedy, listening to music etc etc...sorry, I don't decapitate small animals contrary to popular belief.

A: As WayneKerr seemed pleased to tell people despite confiding in him; one of my many absences from the game was due to stint in prison and apparently eRepublik is not considered a basic human right. Though it wasn't a particularly bad crime I am not allowed to travel to the US for at least another 5 years.

B: My memory is a bit hazy but following a heavy session I tried stealing a marquee from a pub and getting into an altercation with the landlord after denying it, despite being seen dragging it down the road on CCTV. A photo of me was hung behind my three local pubs informing staff not to serve me tequila under any circumstances.

C: After visiting family in France four years ago I decided to join the French Foreign Legion; however, following a few 'woozy' moments in training it was discovered I had type 1 diabetes and that was that.


So gents, which is the lie?

£10k will again be split between those who get it right...

And that scarf looks so familiar!

B is the lie

While A is tempting, as I can't get my head around someone being punished for a crime by NOT being allowed to play eRep...
I'll go with B.

And - tequilla never mixes well with marquees - so I can easily believe that ‘C’ is real too.

‘A’ has WayneKerr in it _ so is clearly fabricated.

A is the lie

A is the lie

I’m gonna go with C, despite me knowing that ‘A’ is a blatant lie...it WAS a particularly bad crime. You can’t defend shagging a womble to within an inch of its life as a minor misdemeanour!

Poor Madame Cholet will never be the same again 😲

28 yo. seems a bit old for the first diagnosis of type 1 diabetes. And on the picture the insulin pump is either well hidden or not present.