Greetings, citizens of the World!

another week, another time to compare, how did our strongest alliances fare in terms of their damage, and who were the main heavy hitters of the week. We have again seen a lot of warfare going on - Asterian dominance in the American theater (where currently majority of USA is under direct control of Asteria, mostly by Iran and Serbia), Indonesian incursion into the USA area (their minister has been very kind and sent me some statistics and summary of their battles, which you can review here), Asteria fully controlling the UK area, several huge battles in Argentina, Chile and Hungary, and even Croatian Airstrike to Latvia - and that's only things I have noticed through the week, so there has probably been much more going on!

A few general comments on the graphs presented below:

- Graphs always use the damage from the last week as displayed in eRepublik.

- All numbers are archived, so later, it will be possible to create a damage history for individual participants

- Colors of nations are used mostly based on in-game color. Colors of alliances are chosen solely by my personal preference 😉

- Countries, which are not members of any or the aforementioned alliances, are all thrown in the "Rest" category (totaling 29 countries). From this group, two strong pro-Asteria and pro-CODE nations have been specificaly selected due to their higher activity on the battlefields. Ukraine and Indonesia have also been singled out due to their general strong performances.

We start with Total Damage again, which in Total is still decreasing with more and more carrots being phased out of the system.

Last week in the Air, Asteria has won with 29,2% before CODE (23,4% ) and Pacifica (11,8% ). Little changes there, as Asteria still keeps their aerial supremacy by slight margin, while Hydra jumped on 4th spot this week beating Andes by 0,2%. 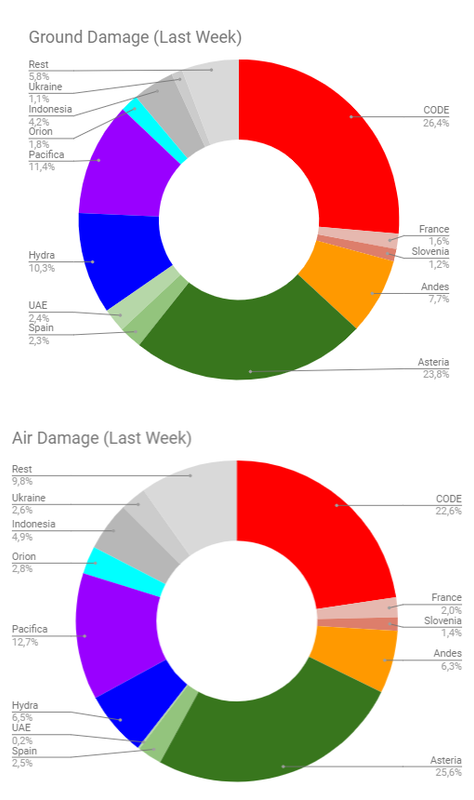 We can also look at individual members of CODE and Asteria, and check their contribution to the total damage of their alliance.

On Ground CODE side, Croatia took the number 1 spot, while South Korea showed impressive performance in their battles. We also saw some increase on Albanian side helping USA, which dropped their damage contribution after weeks of heav fighting. On Asteria Ground side Serbia and Romania account for half of the damage done, with Iran going strong as well on 4th spot.

In the Air, Croatia and USA keep being the main CODE contributors, with Greece dropping down a lot. Notice the difference between South Korea on the Ground and in the Air! On Asteria side, the results mostly match the Ground damage and last week as well, with Romania taking a bigger share of the Asteria pie than last time.

On undisplayed pies (found here for people with interest); Argentina was the main contributor for Andes, with 40% on the Ground and 38% in the Air, closely followed by Chile. In Hydra, Macedonia and Latvia performed strongly on the Ground, while in Pacifica, Poland and Russia are battling for No.1 spot in the Air.

Do you like this article? Do you have any suggestions for improvement? Would you like to add some additional references to wars of the eWorld, which I have missed? Let me know in the comments!

I see Nebula
I put a vote

That's another X columns to track, don't make me do this 😃 !

everyone scared from slovakia, why dont add slovakia dmg?
slovakia against all o/