Today's exclusive: an interview with CIA Agent, USA taking further steps in aTO, bonus: miscommunication issues - what you must know when talking with Spaniards.

1. CIA interviewed!
One of our reporters managed to get in touch with CIA agent, who for the obvious reasons wants to stay anonymous.

FP: Everyone are in awe of recent operations revealing the threat of French pTO on US soil...
CIAA:Yeah dude, we totally revealed them
FP:...however some people keep on insisting that evidence brought by Brits may be inaccurate due to the fact that they speak two different languages.
CIAA: Yeah, dude, but ya know - Brits are now our pro-friends so they wouldn't lie. Besides dude they were wiped, occupied, washed down into Channel by French so many times that they've learnt French.
FP: Oh, now I understand - being occupied and learning foreign language during that period clearly makes fail translation false.
CIAA: Ye, tho now Brits after all that wipes speak a freaked up English... sometimes it's easier to get Canuck and make the talk in French.
FP: I think they've always speak like that... but but to the action: many people wonder what are the other 'classified' steps you've taken to infiltrate that wicked group.
CIAA: Yo, well, I suppose I shouldn't talk bout that but the truth is that we read minds.
FP: No shit - so you just used telepathy? I hoped for some Bond action... 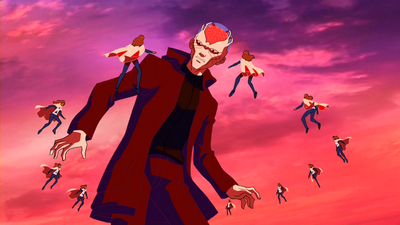 CIAA: TBH it was a routine check of what people think and one of our guys heard 'Ajay contacted me'. And since then we knew they are bad.
FP: Wait, what - so if Ajay contacts someone then it's a proof of hostility?
CIAA: It's a proof that there's something rotten.
FP: But he contacts like 95% of population on regular basis, 3 times a month...
CIAA: Yeah, that why we do routine mind readings of 95% of population twice a day.
FP: Wouldn''t it be easier just to read his mind - I mean it's reasier to read one guy than few thousands...
CIAA: Dude hell no, dude. We can't read his mind - if we do we come in contact with him!
FP: So what?
CIAA: We'd become possible enemies of the state. We cannot let our mind readers to become enemies of the state. Dude, that would totally ruin our agency!
FP: But you could use one mind reader to read Ajay, throw him on a blacklist and then use another mind reader to keep the first one at bay. That wouldn't harm anyone since one way or another you read minds that came into contact with Ajay.
CIAA: So wait, what... Hey dude, you've heard we found a French pTO?

America loving Serbian aTO unit decided to take a big step in helping USA in maintaining their sovereignty and fighting the threat of EDEN pTO.

Friday night was a first step - whole action was meant to strike fast and not let EDEN claim any parties.

EDEN apparently forgot about elections since they've didn't even come up with candidates that would run for PPs.

Unfortunately they've lost by a close margin - at the same time remaining EDEN TOvers woke up, once again meddled in internal affairs by loudly shouting and voting for US SoD Gnilraps, which helped him to win by a close margin with Serbian aTO candidate.

We are still waiting for WH statement concerning those elections. Especially concerning the fact that acting SoD got so much support from EDEN. Some people openly ask for CIA investigation and clear answer: what are connections between acting SoD and rouge group of EDENites. Might be that he is actually an undercover agent of EDEN?

3. Success on fighting the pTO threat

We're happy to announce that Civil Anarchy's policies of loosing bonuses almost reached its climax in Aquitaine. Rubber region was successfully returned to France, tho not without the help from a Country That Names Should Not Be Spoken (because they piss off people from this country or Greeks).

Whole operation was possible only due to the joint operation of Spain, Poland and CTNSNBS against the world superpower France. However since apparently Spain, Poland and USA are a part of non-existing alliance help caused a lot of shit hitting the fan all over the world. Most likely Spain wanted to prove that they are a valuable partner for much stronger allies and tried to fight on 3 fronts, despite having heavy problems on 2 fronts.
Also the fact of losing third grain region could upset them.

4. While in Spain... - a bonus for those who does not want to make a huge mistake

In most of civilized countries all over the world ok means ok.
But not in Spain.

In Spain ok means hell no.

Probably that was the reason why CWNSNBS miscommunicated during the joint operation against world's superpower France.

Daily contest of Bringing walls in RWs up to 80% is still being held daily.

Also Polish MoFA briefly complained that due to the large number of EDEN tourists prevents them from helping baltic allies, due to the fact that Polish Army has to watch over rampaging tourists.

We believe he may soon complain also about tourists from CWNSNBS.

Ariakis - the yellowish Pony of Doom

Youre tears are delicious,

if you rub a bottle of vodka and say PL MoFA 3 times you can possibly summon him to your service.

just curious, who named you speaker of the free people and what makes you free?

We are free because as descendants of the Holy People of Atlantis we've reached higher grounds of enlightenment. And of course I am a Speaker fore that I speak for us.

Yeah. Ariakis is a renegade Pole who got mad after Polish society had decided to leave EDEN in referendum and tried to PTO his own country with party called "Sanacja"(and of course failed miserably). Getting other citizenship(s) along the way, he's currently operating in EDEN-controlled US. Of course, not as a PTOer, but...lemme think....oh I know! A free man!

" Besides dude they were wiped, occupied, washed down into Channel by French so many times that they've learnt French."

Too bad people are too busy posting hating comments without even reading the article .

Yeah Sztandarowy - in Slovak Loland having another point of view and taking part in political life is apparently treason and pTOing.
Also I didn't know that Evry, CA and IS are EDEN agents. Thanks o/

I would like to remind you of your own words, Ariakis, regarding the previous NWO shitstorm: "Pozostaje więc jedna możliwość zakończenia tego cyrku: czyli konkretnie failująca Polska". That means something like: "there's only one way to end this: Poland failing hard". So, what we really are talking about is the most obvious PTO attempt ever, you basically announced that PL needs to be punished...and then started your own political campaign via "Sanacja".

And still *we* are the traitors 😑

Oh yea quote fragment of one sentence and make it a proof of my pTOrishness. Sztandar you're so objective as always. Wonder why you won't work for some respected and impartial newspaper like Daily Mail or Sun if it'd was still publishing.

btw. you forgot to say that I wrote this article after shitstorm concerning breach of PL-USA rental agreement and RWing rubber region from USA by Polish military and my fighting against resistance. 😛
So yeah - you're still traitors.

LOL I love your writing, the comedy is always amusing, even better that most commenters don't realize it's meant to be funny.

yup - those missing the irony are the best

Also for those who may find it difficult to reach any of Polish officials:
if you rub a bottle of vodka and say PL MoFA 3 times you can possibly summon him to your service.

"there's only one way to end this: Poland failing hard"

Ariakis is Prophet? Go figure! Perfectly guessed the outcome of juniorisation of Loland.
And ofc, SztandaLOLy in first 5 comments, but that is not so hard to guess any more, so no prophecy credit on that one for you Ariakis.

How to summon Sztandarowy to your servives?
Must become Ariakis for 1 minute and post a shout or article.

@Sztandarowy :At the rate you are changing sides next year Ariakis will be the hero that drove the Slovak PToers away and showed Poland the true path to ..bla bla keep your 10/10 resources if EDEN is in close vicinity .

@poisin
you did not get this article at all man

"Ariakis is Prophet? Go figure! Perfectly guessed the outcome of juniorisation of Loland."

Yup. We've been permawiped and had to run away from our enemies, while Croatia got 10/10 for almost 2 years. Now everybody thinks we are junior, mostly Spain and Hungary. And USA, which is fighting with (e😵ONE pto and their citizens want to mpp EDEN for some balance.

Being Romperiakis - theme for a movie.

tnh you were permawiped and tried to hide even before the second's world superpower Ireland.

who mentioned Ireland? So here's the next troll.
/puts on Leprechaun hat.