When Tyler Bubblar took office, he made an offer that anyone who writes a decent tutorial (actually I added the “decent”, because I assume he’s not talking about something crappy) would be awarded with a cool $25,000 cc. I know for a fact that $25,000 is the accurate number and has not been surreptitiously inflated.

At first I ignored that offer because what the heck would a newborn infant Citizen be doing writing a tutorial?

But here I am now, about three weeks in, and it dawned on me. I can probably share a few of the things I’ve learned that were completely NOT OBVIOUS in case some other new players might be staring at their screens too, wondering what the heck a newborn infant Citizen is supposed to do with a Q1 house now that he’s been given one for free by the measured weal of the eUS Government.

And one of the more perplexing things to me was the Weekly Challenge, Prestige Points, and what to do about fighting.

I would like to offer you a few pieces of advice for how to use your fight clicks to your maximum advantage. Hopefully what I say will not violate any of the ordinary unspoken rules of fighting for eUSA. I wouldn’t know those rules anyway, Like A Newb.

First of all, don’t waste any fight clicks.

Make sure you complete the daily order established by your Military Unit. In my military unit, Easy Company, those daily orders always coincide perfectly well with the national battle priorities which appear on the eUSA shout feed, so I never have to do much thinking about it. Those 25 kills come with good rewards. Do them daily.

Beyond those clicks, however, you do NOT want to waste resources fighting. For one thing, Like A Newb, you aren’t doing enough damage to dent a piper cub. So don’t fool yourself on that one. But there are a few things you can do with your fight clicks that will maximize your potential to build the important character traits you will need as a citizen in eUSA. And it all happens on Tuesdays.

Learn this important lesson first. It took me three weeks to figure it out, hopefully I can save you that trouble. Plan to fight like hell on Tuesdays.

This is because on Tuesdays, EREPUBLIK resets its “Weekly Challenge”. This “Challenge” is simply a counter for how many units of energy you have spent on fighting (divided by 10) between Tuesday of one week and Monday of the next. Each 10 units of energy spent fighting is worth 1 “Prestige Point”. When you fight in a battlefield, sometimes you spend 10 energy units, sometimes 20, or more. So each time you click the big red fight button, you gain a commensurate number of Prestige points.

The value here is that as you accumulate Prestige points, you unlock valuable resources from the Weekly Challenge ladder. You want these resources.

These are Energy Bars, Storage Units, special weapons, and the key to it all, +1 Energy Recovery.

It is that last item, the +1 Energy Recovery, that is the key to efficiently spending your energy resources.

Whenever you add a +1 to your energy recovery, you are accumulating 10 more potential energy per hour. This in turn makes it that much easier to earn more Prestige points which in turn enables you to unlock more Weekly Challenge rewards.

Here’s the exciting thing about Prestige Points: you do not need any weapons to earn them.

Prestige points are a function of energy spent, not damage done. So using weapons in battles does not impact your pursuit of Prestige Points. It may even be a waste of your resources!

The easiest and cheapest way* to accumulate Prestige points is to fight in Aircraft Combat. These can be found by scanning the Wars tab until you see this icon:

Fighting in Air Combat is best done without equipping any weapon. Those weapons are extremely expensive and do not offer a significant benefit to a new player.

Be careful though. If you have less that 40 energy remaining, you may not want to fight any more in that battle until you have regenerated 50 or more energy. This is because it can sometimes require 40 energy to kill your enemy. If you do not kill your enemy, you will not gain the Prestige points and will have wasted your energy. If this happens, don’t panic. Simply idle in that battle until your energy regenerates above 10 and click again. Eventually you will kill your enemy and walk away with your Prestige points.

If at any time you notice that you are within striking distance of the next +1 Energy Regeneration award, don’t wait. Go get that award. And don’t forget to collect it! You have to click it, then confirm it.

If you really don’t want to fight Like A Newb, then here is my new hyped-up strategy for gaining even greater benefits from your kills.

Go to your profile page and hover over the Mercenary medal and Freedom Fighter medal awards. It doesn’t take much to understand that they are directing you to make a certain number of kills in particular kinds of situations. I’ll cover them briefly. If you need to ask questions, do so below. 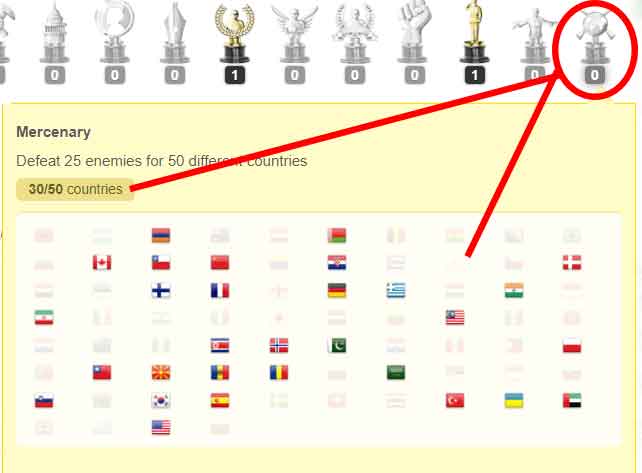 This is simple. Find 50 different countries and do 25 kills for each. End of story. Don’t worry, you fight Like A Newb and don’t really impact the battlefield very much, so you probably don’t have to feel too guilty if you find yourself fighting against eUSA to get your 25. I’ll assume that for stronger veteran players, pursuing this Mercenary Medal becomes more difficult. 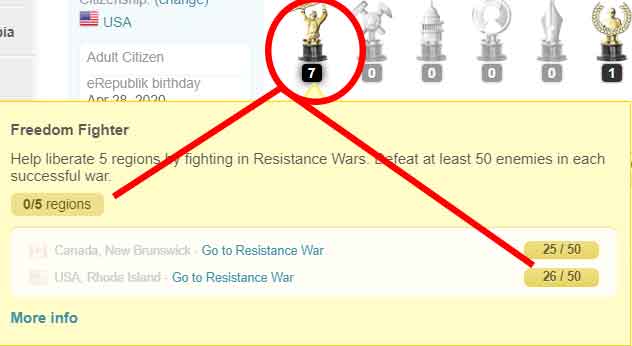 This one is a little bit more complex but you’ll get it. You may be asked to accumulate 25, 50, or 75 kills in a particular number of successful liberation campaigns. You need to understand what that means and how to interpret it. A successful liberation is one where a region is being recaptured by its original owner (like the state of Nebraska being recaptured by eUSA). It is fairly easy to find these. Just go the the Wars tab and look for the following details on that page. Remember to focus on Air Combat!*

It indicates that this campaign is a “Resistance” or liberation.

You want to choose a campaign where the score is lopsided in favor of the resistance side.

3 - Be absolutely certain that you join the fight on the side of the resistance! I’ve screwed this one up plenty. 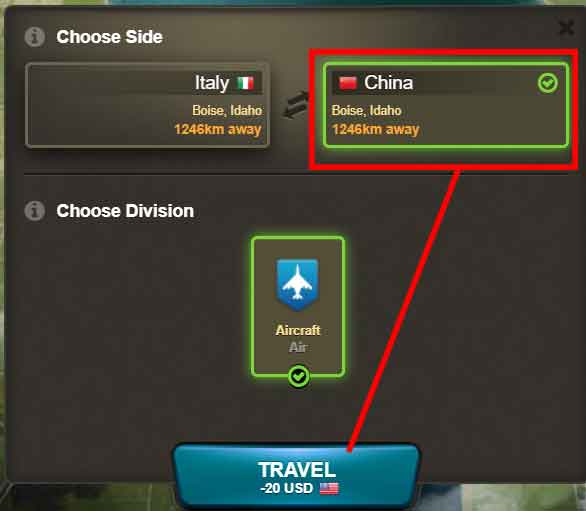 4 - make sure you have enough energy to do the number of kills you need (25, 50, or 75 depending on what it says when you hover over your Freedom Fighter medal). Assume about 30 energy per kill. Go ahead and factor in your energy bars*. There’s no use storing them. You’re a Newb.

Go get those kills. It isn’t foolproof, as there is always a possibility that the occupation force will turn the campaign back around to their favor. But I have observed that if the score is truly lopsided, this is not likely to happen.

Every Tuesday, start scanning the Wars tab for battles in which you can make progress on Freedom Fighter or Mercenary medals. (You may also wish to pursue True Patriot damage, but for that you MUST fight on the ground*, and I will talk more about that in my next Tutorial, because I want the $45K Bubblar promised to anyone who writes more than one!).

Focus on Aircraft Combat* to get your kills.

Go ahead and spend those energy bars. This is FLIGHT FIGHT TUESDAY, and you want to get to the next +1 Energy Restore award. Hoarding Energy Bars is for the big players. If you want to Fight Like A Newb you need to burn those bars.


As the week unfolds, you will earn more energy bars. Save them for the next Tuesday.

Be sure to sign up for GIMP every Monday.
This ensures you are gaining maximum value from those air combat clicks.

In the comments below, tell us what tips can you add to help us Newborns fight in the air?

Be sure to subscribe to Finger Licking so that you won’t miss my next tutorial which covers how to fight on the ground Like A Newb.

I might take you up on that. I earned a decent coin from a Moldovan MU this week redesigning their stuff.

I see how it is.. I am being replaced by the newb

Uh oh. I just stepped into something.

No I Am The Worst

For ground division 1 battles, it is somewhat possible, though challenging, for a newer player to get a battle hero medal.

The trick is to save up the bombs from the weekly challenges, and many many bazookas, and probably a few energy bars. Each bazooka does 3 hits (30 energy) and 10k damage per hit. so 30k per zook. More if you use a damage booster. If you need, you can also buy 55-packs of zook parts in the gold store for 2g each (a D1 battle hero gives 2 gold so if your goal with the medals is just money, might not be worth it).

I currently have enough stored up to drop just over 4m damage in a battle. If I babysit it and pray that one of the mavericks doesn't swoop in and snipe me, it's not impossible to get a medal from that.

I have been wrestling with this problem and your advice is noted. I have another trick or two I'm investigating as well. I plan to try it out this Tuesday.

I just noticed that I have a battle hero medal. I have no clue how.

Try going to another country with a ghost booster or two. You can pick a battle with only a couple of hits from high hitting players. Jump in at the end with your booster and full health and click, click, click. I've picked up 7 in the last week or so that way. Not sure how well it would work outside of D1.

thanks. did you catch my shout out in the Harambe interview?

This is awesome article man, graphics as well.

Good advices but I would do differently on Tuesday morning. Try to be full on energy and your energy pool just after day change. Wait for an epic battle on ground in your division. When waiting for an epic use your energy so that you don't spill it, but so to you are full of energy in about 20 minutes and get those +1 energy rewards that are given fast. When there is an epic start use up your energy there. Use your energy bars too and you will get a lot more rewards faster because epics do give double prestige points. With this higher energy regeneration on the first day you will accumulate for more pp in the werk and you will get your energy bars back again because of this. Good luck!

I appreciate this. The ground equation is much more complex to work through, and this helps.

This is a great article that will help a lot of new players.
Nice job Krapis!

Mercenary and FF are pretty related, you can often fight for both of them in same time.

Hm, if I am not mistaken, you didn't mention Epic Battles.

I am not sure whether it's important for newbies, but you get double prestige on fighting in epics which results in completing the Weekly Challenge a lot faster, leading to faster collecting rewards.

i signed gimp but how i get food?