• by Wilker Nath
If every part of this game was deleted except for the media module, I would probably still use it like once in a blue moon. It's probably the only inherently good part about this game tbh.

props to anyone who recognizes this name before reading my article, you probably already have an idea where this is going

According to science, familiarity breeds good will among those of varying races. More specifically, rats who are familiarized with other rats of a different breed/different fur color/etc are more likely to help rats of that other breed escape a trap. In humans, this concept is called “contact hypothesis.”

I happen to believe that this hypothesis is correct. Spending time interacting with someone of a different race will make a person less likely to treat a third party of their friend's race differently from their own race.

For MLK day, this is what I was thinking about. It was illustrated by a feelgood story about someone who I consider to be a personal hero.

If you're active on the parts of the internet that debate racial aspects of RL politics, you've likely passed by this image or something similar at least once: 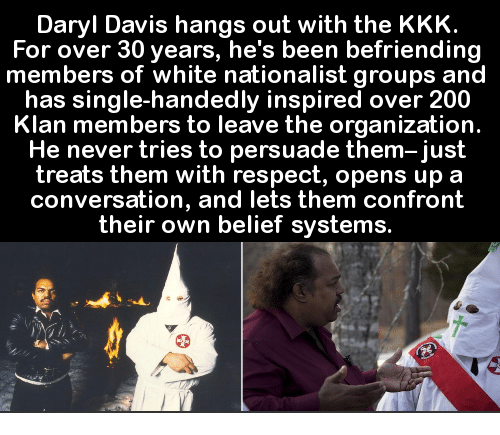 Well, it's not bull. That guy is real, and he puts contact hypothesis into practice in a big way. I won't waste words here, I'll let you hear his story directly from him if you so choose.

his voice is smoother than the sweet music he plays

So I've been thinking about Daryl Davis this week, and comparing his life to the iconic quote: “I look to a day when people will not be judged by the color of their skin, but by the content of their character.” I think Mr Davis is living out the dream that MLK Jr was talking about.

Daryl Davis is not every human, though. There is a lot of hate out there. There are a lot of people who dislike others before even having met them, and race is not the only reason for their hate. Yes, white ethnonats exist. There are people, as Daryl has seen firsthand, who believe that the races would be naturally more content and more harmonious if we all lived in our own communities, separated from people who look different from us. If you dive down the rabbit hole, you'll find they make good arguments for it, too. They talk about how the culture and individuality of many smaller groups across the globe is dying. They talk about the value of visiting India during Holi, or visiting Mexico on Cinco de Mayo, and seeing things as a tourist that you can't get anywhere else in the world. And they use it all to justify their desires for America to be split up along racial lines. I've talked to people who literally believe that something is to be gained by making Chicago a black-only city, California a hispanic-only state, and large parts of America white-only.

They may use flowery rhetoric, but their ideas still contradict what I believe to be a truth of human psychology: familiarity breeds good will, and distance breeds mistrust.

So what do we do about it? How do we respond to people who think that way?

One option is what big tech companies have been doing: ban them and hope they go away, or at least stop spreading their views. Out of sight, out of mind (at least until gab and bitchute slowly gain steam and eventually surpass the gradually-declining youtube, facebook, and twitter). I see this as creating more problems than it solves.

On a more personal level, option one can include cutting off friendships, and even familial ties. My family actually had a large rift over politics since 2016. My grandmother and her sister, who have been friendly their whole lives, spent multiple months of 2020 refusing to speak to each other, because they disagree about Trump. I'm sad to say there are friends I have some great memories with who I no longer talk to, as well.

Another option is allowing hate to take over.

forgive the weeb trash, but there's a good message here, and it ties in directly to the next part of my article

I've seen it from other people, and have been disgusted by it. And I've seen that type of hate within myself, and jumped through mental hoops to find why it was okay for me to feel that way, but not for others.

I've talked to someone from Palestine who believes a special tax just for Jews is good and justified. I've seen friends celebrate and make light of the violent deaths of police officers. I've talked to CCP members who believe the people of Hong Kong are race traitors for refusing to accept one single ethnically-unified government, that is essential for a unified defense from the hostile influences of the West.

It's easy to say that other people shouldn't feel those things, but it's hard to put down the molotov cocktail ourselves and actually have a conversation with someone we hate. What we should be doing is connecting souls, to find out why they think that way. It's something I confess I have a very hard time doing. That is why I admire Daryl Davis so much, because he is able to easily do something that I struggle with. The content of that man's character is superior to mine.

In hopes that this one didn't come off rambly, let me illustrate the third option by giving you a challenge:
Find someone from That group. You know which one. The one you swear you hate. The one that you secretly rejoice whenever you hear about death or misfortune befalling one of them. The one that you simply cannot understand WHY they think or act the way they do, and the one you're sure has zero human sympathy in their soul. Find someone from that group, and try to understand their point of view. Try to find some condition that would make you (or someone you consider a reasonable human being) shift into a line of thinking similar to that of your “enemy.” Or failing that, take baby steps. Bond with them over a shared interest. Music, games, sports, anything. Find an ice-breaking activity, a key to connect your souls, and start from there, with the earnest goal of mutual respect and realization that you're both human beings who deserve sympathy.

And I'm not just spouting idealistic drivel with this challenge to you. I have faced racism in my own life. In fact, I've had my entire life direction changed by racism. I know how easy it is to hate, and I make this a challenge to myself as well, because as I mentioned, it is something I struggle with.

If we want to end that cycle of hate, we need to do it.

If we want to lessen the amount of hate in this world, we should follow the example of Daryl Davis. Talk with “the enemy.” Make friends with them. Be willing to see them as human, and hopefully, they will be willing to do the same. 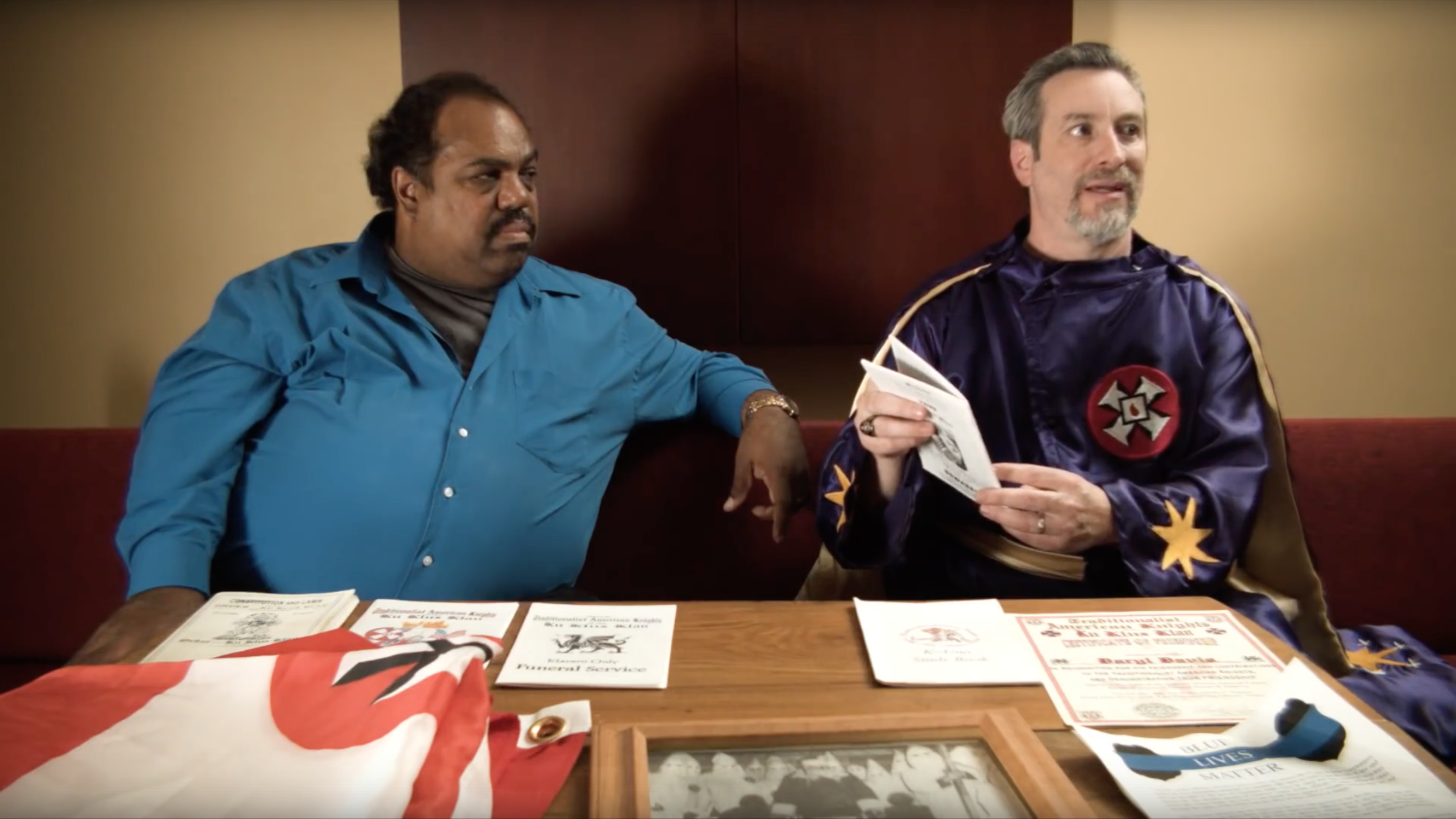 This is the best article I have read in this game ever. Excellent work and I love the choice of content.
Listen to this song by Kanye & TI. Its a great song with a back and forth rapping of political views. I feel like Kanye tried to take this approach with Trump and the MAGA movement. I especially like Kanye's last verse where he talks about being the first in a gang truce to shake hands.

been a while since ive derived so much joy just by reading an article on eRep, super job there!

I'll spend a little more time reflecting before I remark since it's specific to rl. I don't view others through a us and them lens except for those who would have me dead. And them I avoid, so no, I won't sit with that them.

thank you for giving earnest thoughts

most folks who know me know I'll give a sincere ear to literally anyone (to my detriment I'm told) so I do appreciate where you're coming from. But having experienced the very real physical threat and harm that comes from someone who views me as the other, it's responsible to preserve yourself over entertaining "the enemy"

I strongly believe, irl, in this ethic.

I think it can do a lot of good in eRep too.

"This video contains content from TV TOKYO Corporation, who has blocked it in your country on copyright grounds."
Ch! It is blocked in the rest of the world : https://watannetwork.com/tools/blocked/#url=18foq__Yut0 : (

But it is work : https://youtu.be/IMgGOo0QA2Q

You made logging in today worth it. Thanks.

I endorsed for the sentiment. And I want to troll both rainy and G for there admiration of the troll that used both the national socialist leaders title and the title of the leader of the organization that is featured in your piece. I apologize if I am one of the ones to have bothered you.

For blurring rl with game. again. as usual.

This is a wonderful read my friend

"Video unavailable
This video contains content from TV TOKYO Corporation, who has blocked it in your country on copyright grounds."


Yo Wilker, what's up with that interview??

Paperwork got held up at the dmv

I grew up my first 10 years in Kansas City, Kansas. The neighborhood and grade school were 97% white in the 60's. I knew virtually nothing of color. But my Mom's family is Polish. My Grandfather and Grandmother immigrated to the US from Poland immediately after WWI. They did not sneak in, came through Ellis island into New York and were automatically 2nd class citizens, they had no money, spoke no English and were a different race. At that time, Polish, Slovic, Hungarian, Croations, were the new people groups. Like their predecessors, the Irish, Italian, Greek, Chinese, Pollacks got the worst jobs, lowest pay and segregated into the NY ghettos. My Grandparents moved to KCK because of a community called Strawberry Hill. It's still there. All the Slavic people stuck together, despite the fact that in Europe they were bitter enemies. The helped each other, built community, learned English and how to "Do like Americans." I can still remember Granma yelling at Granpa "In English Mike! In English" as he cussed us in Polish. Most of the Polish I can speak is farm animals and cuss words. 😁

I knew we were different but mostly for good reasons. Strawberry Hill people were close. They knew how to party. Didn't matter if you actually knew people getting married, you were automatically invited to the party. Also, the food was great.

My Mom taught me an important truth. Treat everyone with respect and be polite, doesn't matter who they are. At least until they shit on you, then piss on 'em. 😆