I'll be honest with you. This debate was a wash, so much so that I'm using my personal paper rather than official WHPR to get this published.


The reason this debate was so bad was activity. The one I did with DSS and Bubblar, they both responded to questions in a timely manner, and it was a pleasure to host. The one with Cthulhu and Groot, I can say the same, it was a pleasure.

With this one, Derphoof was responsive. Trite, who created a discord account just for this debate, was reasonably responsive considering.

I hate to use the CP debate platform to bash a candidate, especially since someone will probably just say this is tribalism on my part, but what I hate more is publishing half a debate which one of the candidates didn't even show up to, despite repeated promises. Communicating with CG has been like pulling teeth.

I contacted him on discord over a week in advance of when this needed to be prepared by. 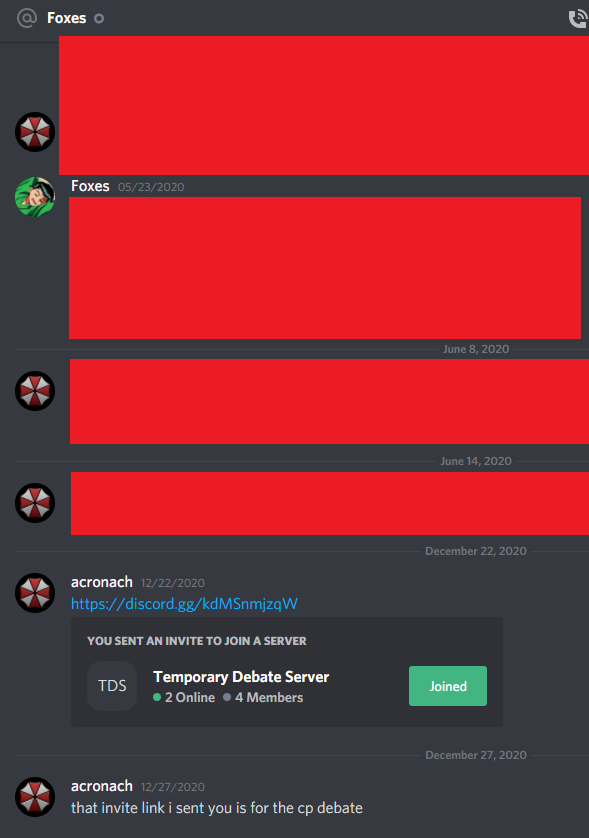 I was then told he is more active on TG, so I reached out there.

Following this, he joined the server where the debate was being hosted, but did not respond to a single question. 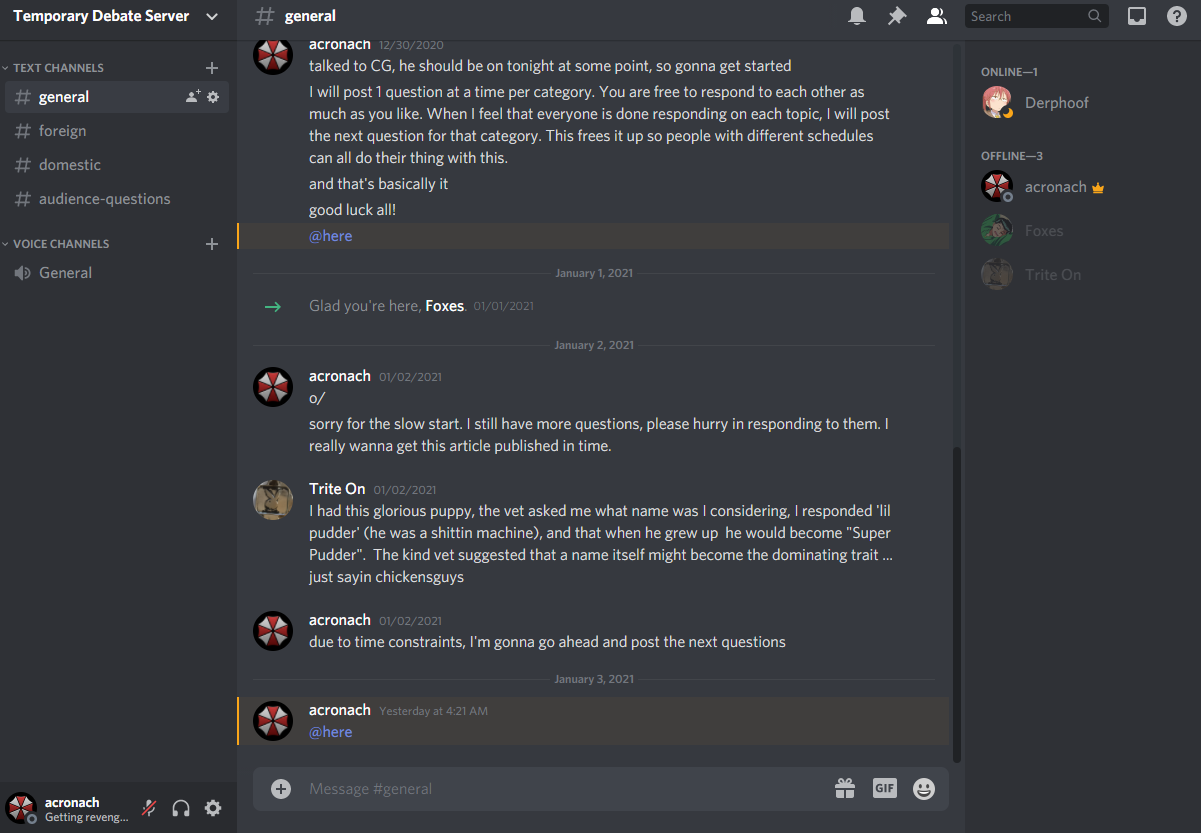 Again, I REALLY hate using the CP debate to bash someone, but there is one reason that this debate has not finished on time.

That out of the way, on to the actual debate, such as it is. 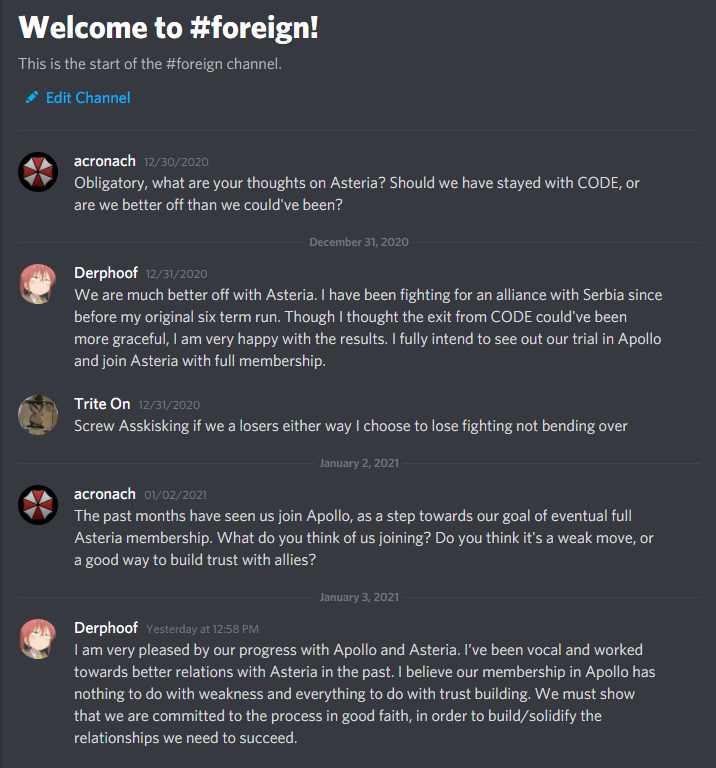 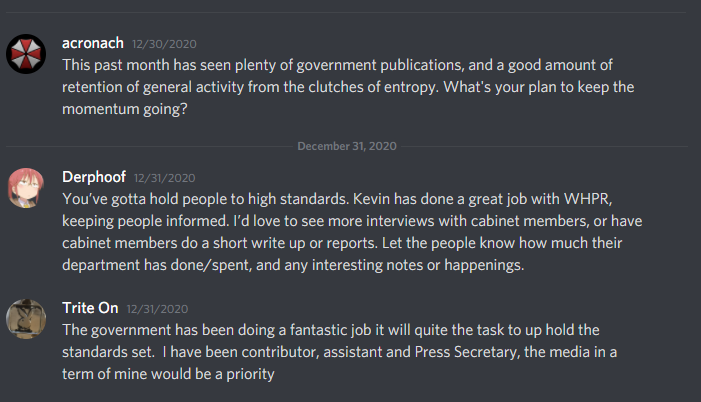 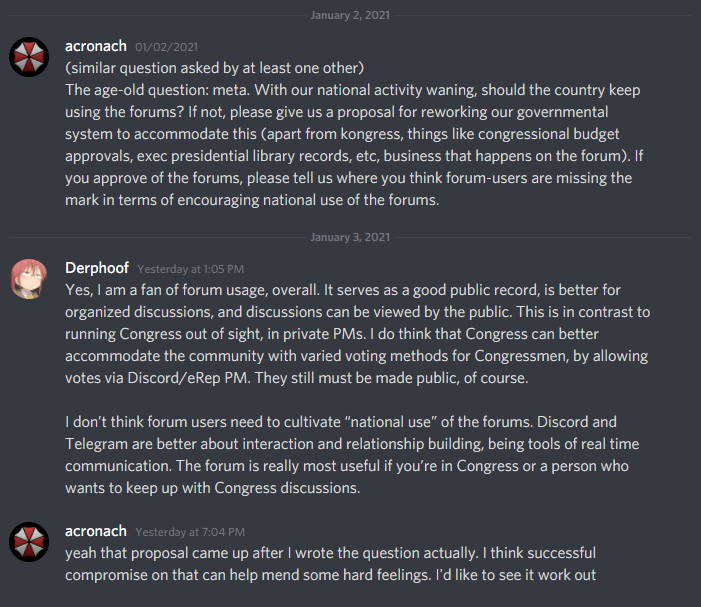 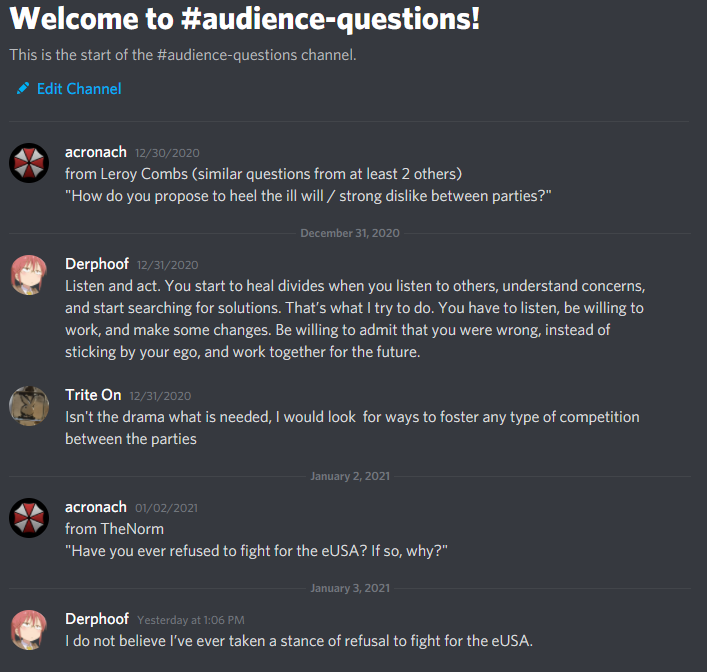 For the sake of the audience, and so the candidates have a chance to respond to the other questions in the comments, I will post all the unused questions here.

Foreign Affairs:
TWs: do we have enough? Do we need more? We need more, right? What's your plan to get us more? (unless you don't think we need more, in which case, tell us about that).

Domestic:
A topic that's been on the minds of many for the past while is Gnilraps/Krapis. On the one hand, he is a power player who worked wonders for the nation on the battlefield, in the CP seat, and during ATO operations in the Ajay era. On the other, he concealed his erepublik history for several months after creating his new account, and was elected PotUS under false pretenses. What are your thoughts on this character? Should action be taken by congress or the executive on the subject?
[bonus: question was written before the return of gnilraps]

Government spending has come up as a question in this election. Has the government been spending too much or not enough? Should spending priorities be any different? Is there something else we should throw money towards, as opposed to domestic programs?

Audience Submissions:
from Herr Vootsman
"What do you think eUSA's biggest mistake was and what would you have done differently?"

from PimpDollaz
"We seem to have hit a dead end in the country and this game with the same cycle of training wars and not much else. Besides the usual government handouts and articles, what plans do you have to engage newer players and generally make things more fun for the average player?"

from RF Williams
"I'd like to see a good discussion on best ways to maximize redistribution of tax wealth to benefit all active players (not only tanks), while at the same time making sure there is a rainy day fund for emergencies."

from King Harambe
"Ask chickenhead if he ever plans to stop using tax money to get re-elected."

from zRTx
"Why do you believe in Dio?"

And there we have it.
Here's to a better debate next month.

It will be so exciting! \o/

anime is for girls.

asking for a friend.

that be hittin different

Video unavailable
This content is not available on this country domain.

Not shocking about cg.

Very good effort tho, thank you for doing these.

I do like doing these. I hope the next one goes better.

Forging Activity or Foreign Affairs - Invade and free the eFrench-Canadians from those torries who love living under monarchial dominance, cede parts of the southwest to eMexico, the ensuing population explosion (from the RL American Latino population) will more than offset initial loses from the normal accounts that come and go every time something new is comes along.

Domestic - the Pollyanna plague GnilKrapis instigated to purge those that threaten ~ his ~ game is quite the real health risk to OUR game. Simple two chioce, herd around gnilKrapis, he wants to be your idol ... or hold your head high, the low blows will be coming and united we can stand against them.

Audience Submissions -
Herr Vootsman - not dumping the meta-game already, recently it was the tool for duplicity wielded by the CP. Be done with it! The initial activity restructuring our government and it's functions is well worth and devalues the contrived notion of the cost of doing such.

PimpDollaz - the plans for real war and shifting the government back in-game should offer plenty of opportunity for new players and criticisms form old players and death rants for those that like to threaten to quit.

RF Williams - a rotating lottery, perhaps daily. using the different national org.s. Such a national effort also might start providing some better numbers on actual active citizens (those not running account communes). A new constitution is long overdue, as well.

zRTx - the cult is made up of usually older players that have earned (begrudging at times) my respect (though not universally).

Well this was very disappointing but thanks for your efforts Wilker. I don’t think I can vote for anyone this time around

Such a rousing debate. We should definitely vote for one of THESE candidates!

Was the debate announced publicly? I must have missed that...

I contact PPs to find out names of candidates, and I use shout feed + PMs to ask people for audience questions. The PMs I send are to names I recognize in the first few pages of each party member list (congress people and people with party titles)

I'll make sure I get you a PM next time

kinda fun if you still have players want to have debates
somecountries dont have lol,
tried to arrange this month debate but noone is interested

Our departure from CODE was graceful AF....

I do apologize. Being a real life American I do understand how important the pomp and circumstance is for your election. But damn... Canada has evolved. Our presidential debate is private, usually the exec PM. This month it consisted of "Well I don't have time." "Me neither." "Crap, I did it last month! Why do I gotta do it again?"

I know you think I'm kidding but it's closer to the truth than you know. 😄

These are always entertaining, thank you Wilker