A technical overview of Resource wars

Hello, eRepublik community,
As further details on Resource wars III have just been released today, I want to write some notes about this tournament, also explain its mechanism and compare it with the second resource wars for the ones who haven't experienced it.

- the first considerable point is this tournament which will last for one month is NOT designed for the individuals. so, if you're playing only for your own interests, ignore this tournament. It's founded purely based on teamwork to plan, observe, and manage the country's wars in order to get the tokens at the right time, and more importantly, to draw a good regional or even international strategy for your country to take the proper resources due to your needs and your power.
There were some countries - like Georgia- who rushed to be full bonus countries, while they nor their allies didn't have the sufficient power to defend it. Georgia also blocked a vast area in Europe to take Granite and Rubber by setting them in its core. So, they doomed to be perma-wiped by the enemies which resulted in a rage-quit for their e-nation. Hence, a wise vision is needed to be successful in the long-term.

- I did remember Admins said the resources would be permanent in the last tournament. but, as the game's community is going to die, it was somehow predictable that admins reconsider it to make a flow into the game; however, as the same Interface with the last one has already implied it, today we've seen the main rules and mechanisms are quite the same which has disappointed me a bit.

- As you might notice, to get a resource you need to have its token. but how you can get this token?
In a simple word, you need to manage your wars in a way that when a resource becomes available in the resource pool, you'll be the FIRST one who reaches +30k dom. points to catch it, as it follows the FIFO rule.
Keep it in mind that you can't save your tokens, nor they're donatable (In resource war I the donating option was enabled). once you reach 30k points, it'll be reset, and you either win the token or miss it immediately. So, it's crucial to manage your DPPM (Domination Points Per Minute) in a way that you get the token right AFTER the resource is activated in the pool.

(1) This new tab will be added to the leaderboard during the tournament time. Also, the refresh time will be reduced to 1 minute instead of 15 minutes.
(2) These were the countries competing to take Saltpeter. Iran got the bonus as she reached the token at the right time.


- On the other hand, resources won't be lost after they become available, and due to my experience, a lot of common / very common / uncommon resources will be piled in the pool for some hours. so, don't be hasty to take these types of bonuses in the first days.
the real war is on the [very] rare bonuses due to 2 reasons: first, it is quite obvious that there're a few of them available.
7 Granite
13 Rubber
13 Neodymium
15 Limestone
20 Saltpeter
20 Cobalt

and second, more importantly, setting a rare / very rare resource will block considerable neighboring regions around it to have the SAME type of resource.

- The dictator or CP of the country will sort the resources regarding to their strategy into this box, and as soon as that country wins the token of the written resources they will be allocated in the defined region. 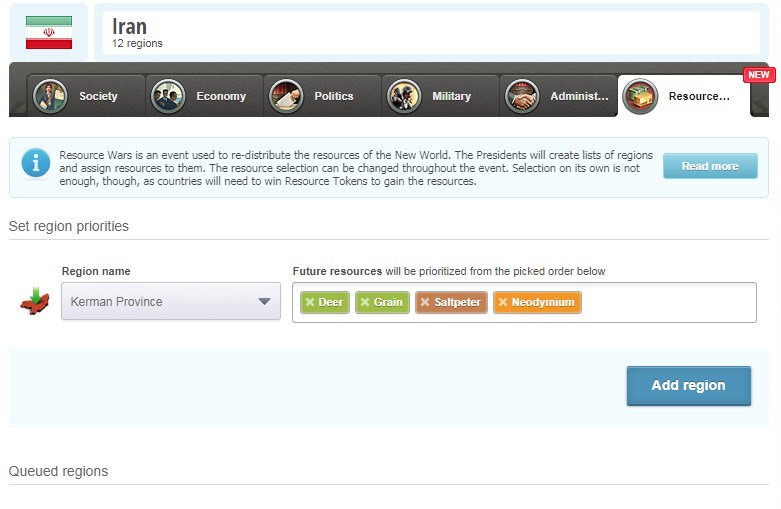 - Once a resource is taken by a country, it will disappear from the resource pool which means it's disabled to be taken by the others. Then, It goes to the Allocation tab with the country's and region's name as can be seen below. 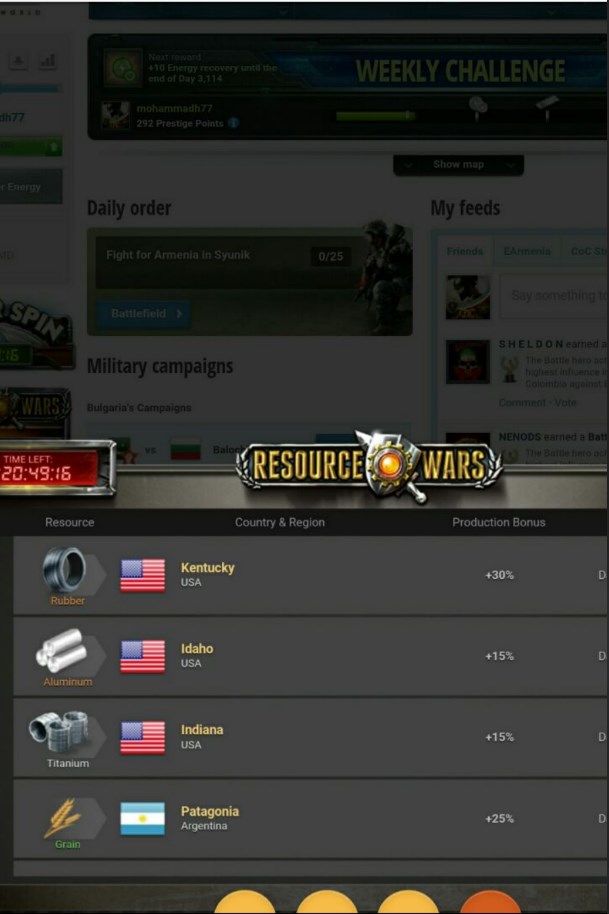 In comparison with the second resource war, there're some changes worth noticing.

1- Number of Resources
We see some changes in the number of some resources. the most significant one is doubling the Aircraft resources. Although this industry doesn't have any WaM tax, this increase shows admins want to develop it in the near future.
On the other hand, the number of resources in the Weapon industry decrease. there are 4 fewer rubbers available in the pool, which means there will fewer full bonus countries in this type of industry, and more probable wars will occur to grasp it.
The food and House industries will almost remain intact. 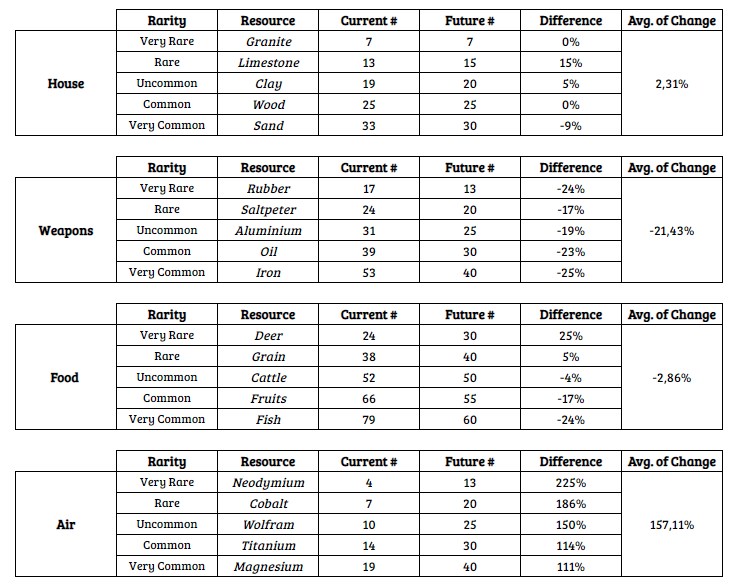 2- Radius
As the number of resources in Aircraft increases drastically, the radius of its rare and very rare resources is ratherly halved. 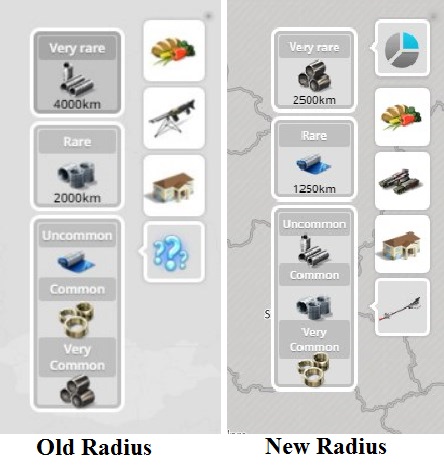 However, the radius in the weapon industry increases. I've brought setting Rubber in a specific region of Romania to compare this change in radius. 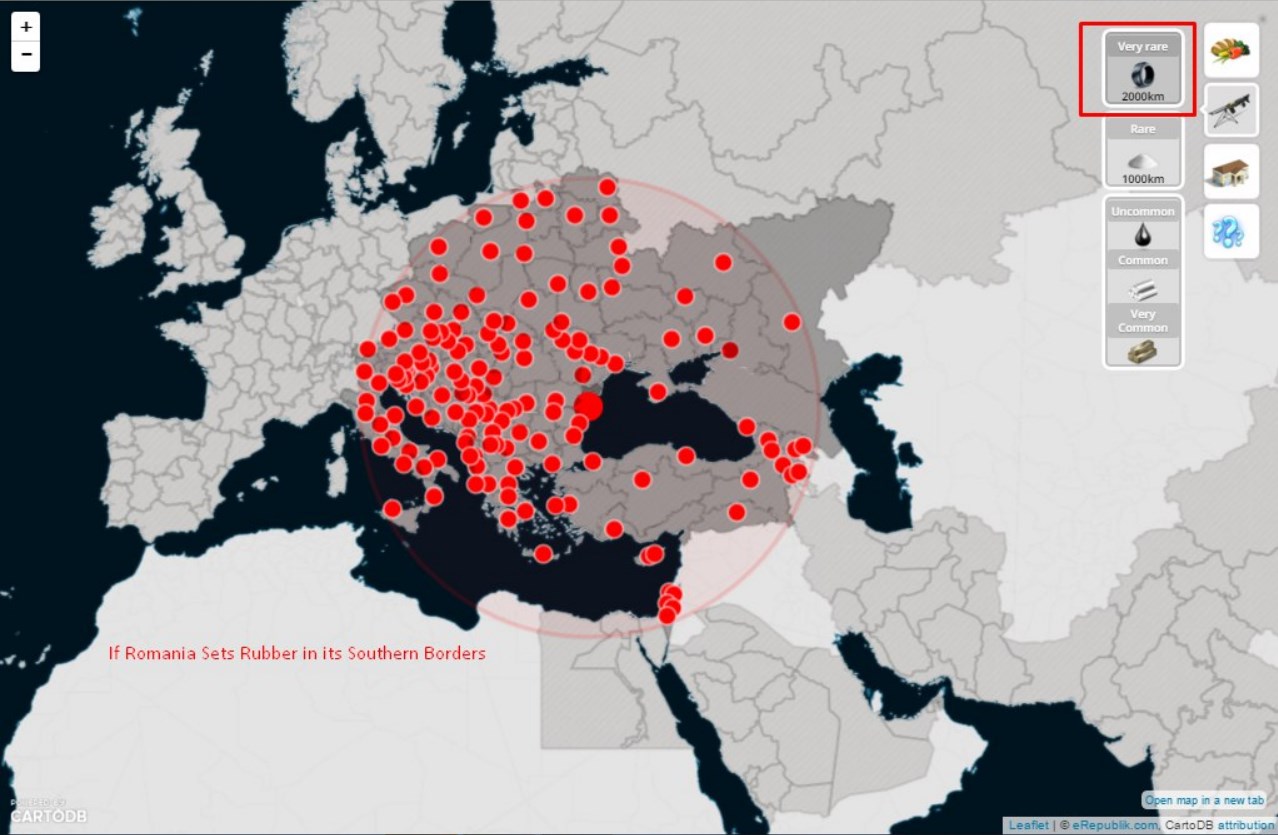 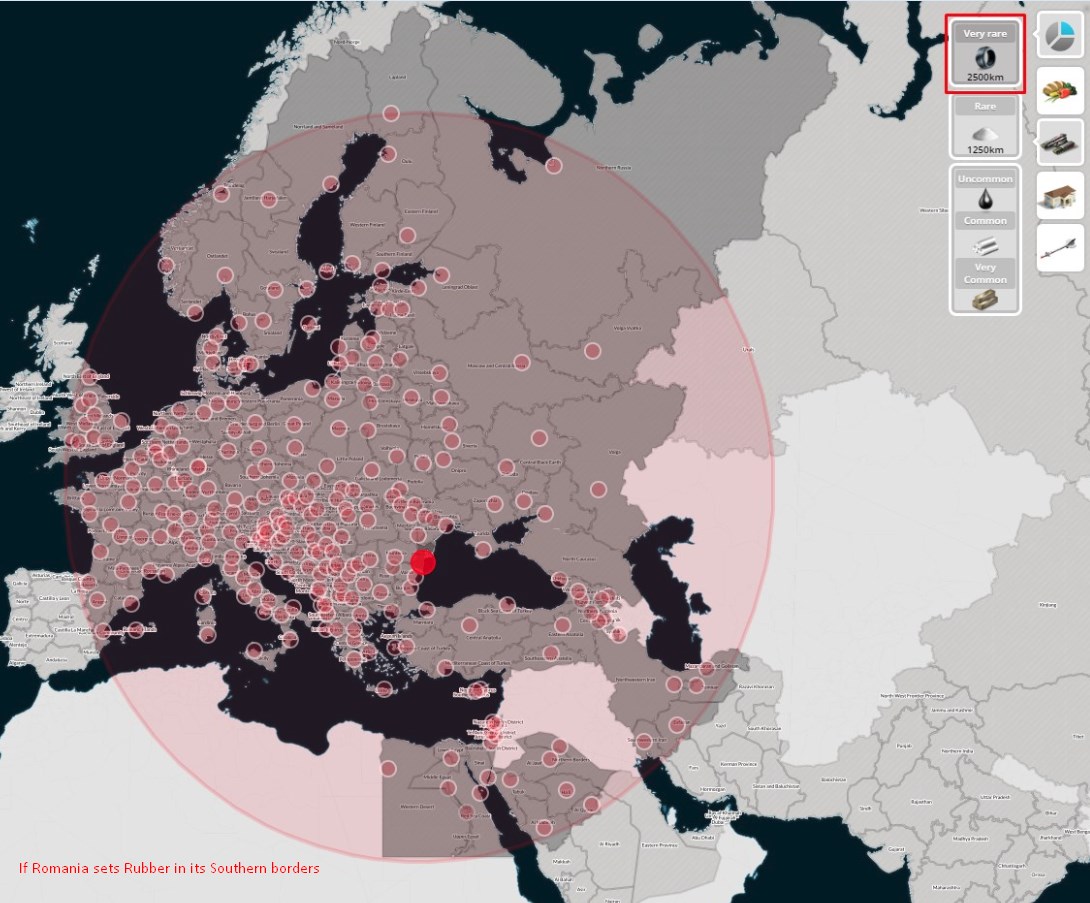 3- Max Cap. of Resources
Although the max cap of resources in a single region is still 4, the number of resources each country is allowed to set won't follow the former rule (it was equal to the number of original regions). from now on, a Country can not assign more than 10 resources. So these countries should challenge the new rule:

- During the process of fixing your walls, you should be very well prepared to be screwed by almost Anyone, even your friends.

There's also a 5-minute cooldown at the end of each round wich makes the rate of zero in taking dom. points.

- There's an impact of the equator on the radius of each resource. the more a region is closer to the equator, the less radius its resource would have. you can easily test it by moving your mouse through the resource wars' map. the regions nearer to the Poles get a bigger red circle around. 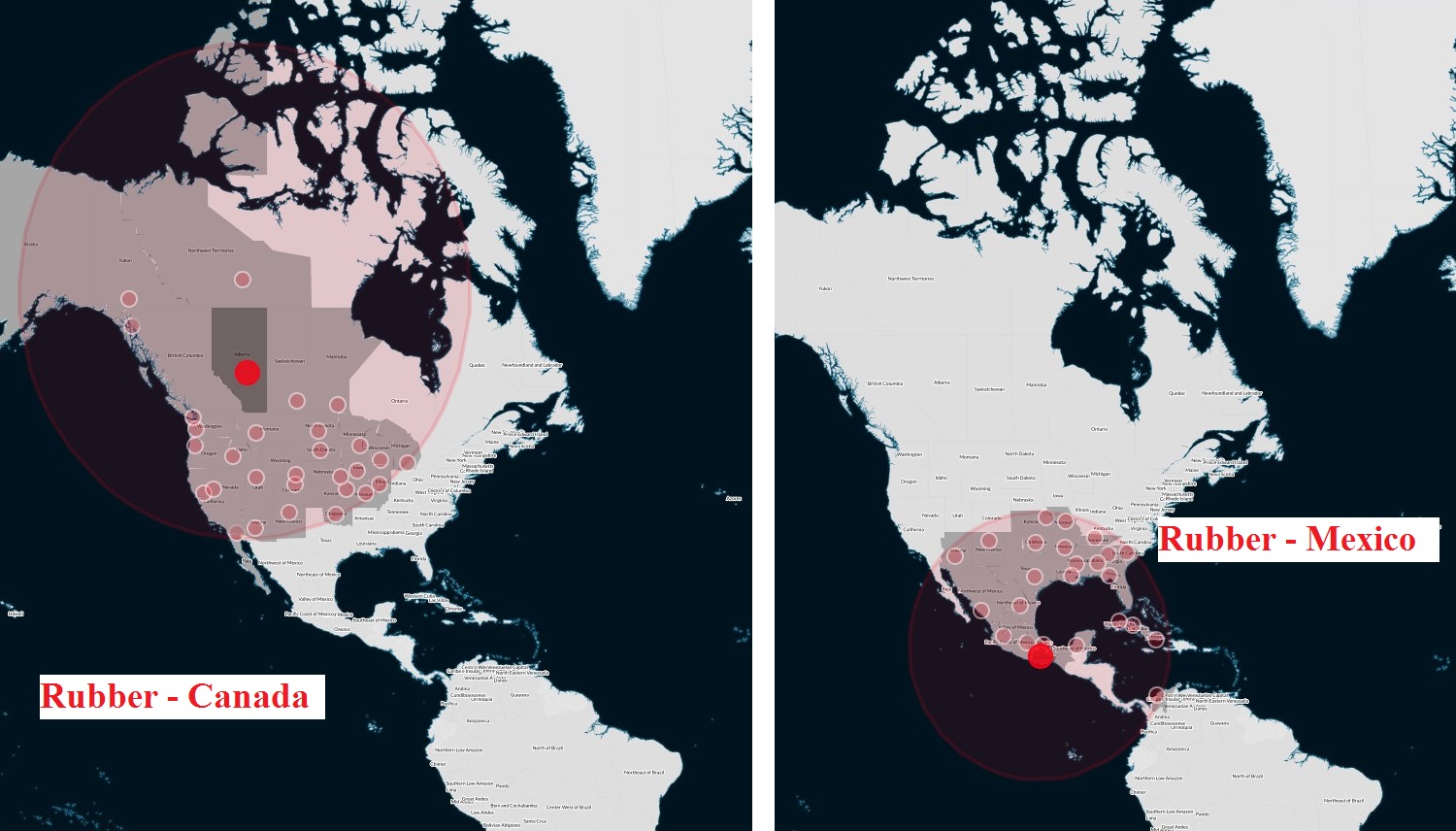 So, I think I pretty much said it all on the preparation phase. I may write one or more articles depending on my free time during or after resource wars.

A technical overview of Resource war

Álvaro Cunhal Will sell for you all the weapons you need for this event!

Best seller in the world.

And of corse Nice article..
I have a small Diference of opinion, but maybe i put in article

Thank you for putting this together! Well done!

A very nice article. Only one thing:

"- There's an impact of the equator on the radius of each resource. the more a region is closer to the equator, the less radius its resource would have. you can easily test it by moving your mouse through the resource wars' map. the regions nearer to the Poles get a bigger red circle around."

It is ovious that radius becomes "appearently" larger, since the world map is a projection (you can have a spherical surface pulled out to 2 dimensions), so the radius circle is larger only due to map projection reasons, but having the same radius measured in km-s.

Yeah but that seems like going overboard to make it realistic!

So it's either coz of erep's miscalculations or the mentioned impact

Great article, thank you for filling in the blanks!
o7
R.

Individuals will need to collect relocation tokens for their factories as well.

Is there any description somewhere how could you collect these tokens?

"By contributing to the war effort citizens will be able to collect tokens that will allow the relocation of companies and other event exclusive items on the weekly challenge."

At the bottom of the info page on Resource Wars.

Nothing as yet about how many can be earned and how many needed to move a company.

Will the neighboring countries get affected if we place the resources in the edge of our country? Will it block their placement?

Oh, yes! 😮
Some resources will only be in 1 place in Europe because it will block almost the whole Europe.

I forsee that South Africa will have many resources. 😛

Thanks for this very informative article
o7

nice one dude
thanks

"By contributing to the war effort citizens will be able to collect tokens that will allow the relocation of companies and other event exclusive items on the weekly challenge."