Economical Situation of US in eWorld

Work Tax
Work tax is one of the most important aspects of the Economical Module of the game , based on this tax (+ average salary ) each person no matter employee or employer will have to pay some money to treasury .the way it is calculated is based on the Percentage of Average salary of each country for example Us has 1 % work tax which means 1 % of average salary that is 1714.25 so anyone who works in factory or for someone else will have to pay 17.14 cc for each work to the treasury.
following countries that are considered as the Economical powerhouses have these Average salaries and their Respective Taxes .

In This Aspect USA hast the Second lowest tax among the countries with same economical power . 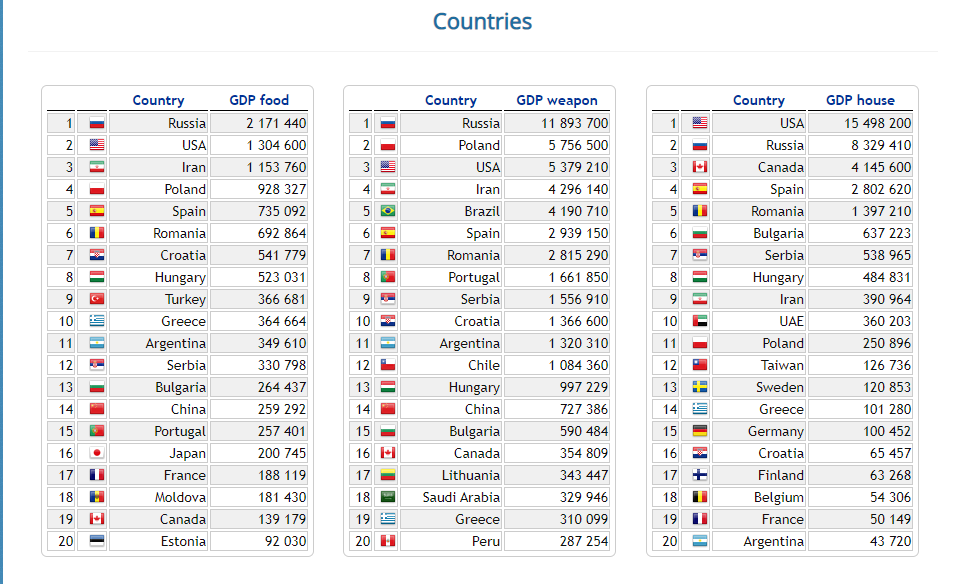 thanks for the article, though you left out the commune scene in tax calculations.

Good stuff man, keep it up!

Interesting article. I didn't know this nation was that strong in economics. Seeing so many training wars, meaning many citizens can't eork inthe eUSA it is amazing.
Welcome in the eUSA. 😃

Yes that was a most stupid action of the current CP. However at least something exciting happened. 😉

You are right, my bad English. Not current, but indeed the one in that time.

I have my factories in eVirginia and only had one interruption lasting a few days, in the past several months

For eUSA citizens there isn't much a problem because most factories are relocated with the help of the government or by themselves, However for the foreigners that have their nation in a TW with eUSA they can't work in them, so they have located elsewhere or their factories are idle. That made our economics go down a bit.

Very good. I am curious what the world market is like for aircraft weapons

that industry does not exist but it has the best worker value if bought , but on the other hand no one buys it so

Welcome to the eUS.

salaam, welcome to the eUS