Sorry for being basically dead the past week and a half. Been getting used to a new job. I've still been lurking here and there. And one of the things I saw in my lurking was this:

Now this is one with a lot of angles to approach from, and I think the best place to start is the character references for Dom that congressman have been posting there.

Let me add my own.

During the month of April, Dom was the ONLY one messaging new players. He is great for in-game party activity, which trickles up to country activity. His motivations, as I've seen them, seem to be all for the good of WTP (and I should mention the mentality of the majority in WTP seems to have the goal of creating a 50%+1 voting bloc in congress, and culling in-party dissent as it interferes with the first goal). Overall, Dom has done a lot of good things, and I've even worked with him on projects here and there despite our disagreements on IES.

I hope Dom keeps trying to promote activity, even though it does feed into that voting bloc mentality I mentioned. National activity is what we need at this point in the game.

Now I said that above to sort of give a soft cushion to what I'm about to say here. The purpose of this particular blacklist was to punish a PP who actively instructed congressmen to approve immigrants that have been denied by IES, some of which are confirmed to have been involved in Ajay's PTO, after interviewing them himself and deeming them acceptable on no other evidence than self-reporting.

So let's be clear on what blacklisting is.

Now let's get into the actual subject that led to the blacklist. This'll be a bit of a scattered and fragmented thought process because there was a good variety of subjects talked about.

Yes, there were multis. Dozens of them were banned from WTP, many of which attempted to throw our primaries. I don't think those dozens were created by VT. VT had his one confirmed account, alien president, and I don't think he had any past that. He tried his best to troll and have some effect on our country's political state, but he largely was unsuccessful I'm happy to say. The first reason I say this is because the multis that were banned were active before alien showed up, and the second reason is I don't think alien wanted to be banned for multis himself, and he knew he would get reported for it.

But I digress. I definitely want to write a whole article about that topic, time permitting. As it relates to the blacklist, though, I have to agree with Paul, they're two different topics.

What I would like to see before supporting this idea is evidence that he has changed his mind on IES, and regret for what he has done. 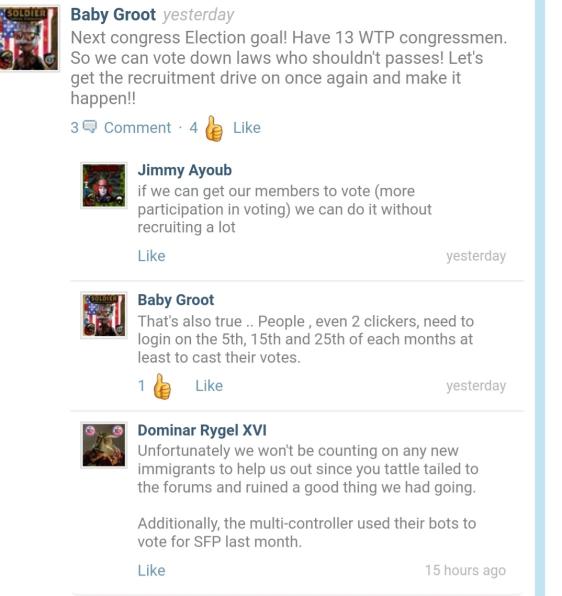 I do not believe that he has changed his mind on IES. I do believe that, given a similar situation, he would seriously consider doing the same thing again. Part of what led to this offence is not multis, it is the mentality in WTP that we need a 50%+1 voting bloc in congress by any means necessary, including subverting national ATO safeguards and culling dissenting voices in-party. As far as getting to a spot where this isn't something we have to worry about? Man, idk. 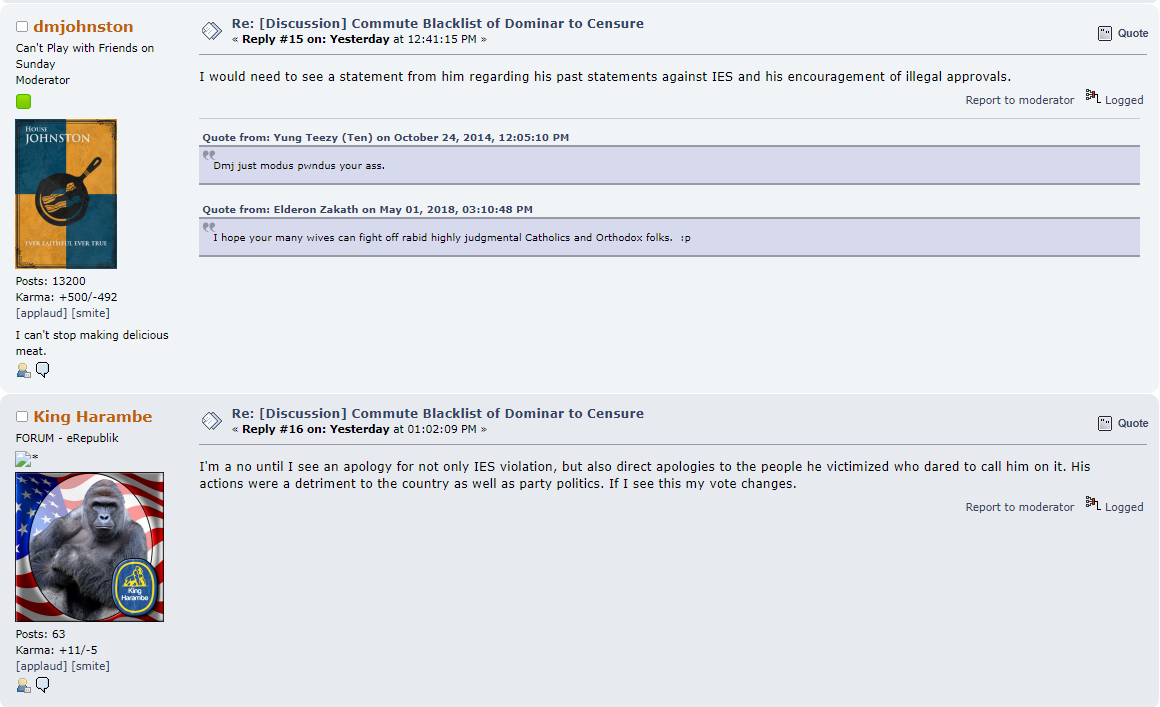 Even back when this whole thing was first blowing up, I privately advised him that he should make a multi-paragraph article apologizing for the whole mess and saying he'll never do it again. I maintain that had he done that at the time, his position with regards to this blacklist today would be 1000x better.

Many in the thread mentioned Rainy is a person who specifically needs an apology. I think Taco and Ryan Christ also need personal apologies.

And I did see this that Dom posted, but I don't think a 1-line blurb is gonna cut it for almost anyone in congress. I think a multi-paragraph article would be the best way for Dom to get his blacklist commuted.

As a final note, IES is not something to be played with.

If this topic were something else, like a budget item, or a war, or a resource concession, or even the use of the forums, Aggro would be 100% correct. IES, however, is a special case, because it enables us to even have a congress of our own. Without IES, our country would've entered a state of permanent PTO long ago. Any english-speaking voices in our politics and our media would've been long drowned out by the sea of thousands of enemies that Ajay wanted to let in. Without IES, we would not be an AMERICAN country.

IES must NOT be subverted. Period.

inb4 "you're a PTO!" "you betrayed the party!" because I'm thinking past how the PP tells everyone to vote in the private WTP congress group mail

Actually, my people spoke very good English. As for INCI? Besides for Kemal and a few others, basically never heard them say anything in English.

What I did was bring in foreigners in response to my party being PTO'd, and with the help of OTHER foreigners who were used against me.

I was also always firmly in control of the situation. I brought together random groups to try to change the corrupt system in this country, something which mentalities like this feed in to.

I think you give yourself way too much credit. There's a reason it fell apart when CG dropped your ass.

I think you're misremembering events. things started to unravel with a free area thing when you ppeople imported hundreds of croatians, albanians and others. the extra 400 or so people you had all of a sudden gave you the ability to take over our party. after that Hannibal who we all found out later he just wanted to steal a national treasury for himself, and he made a deal with the government and most of the Serbs left. Then it was game over. As for CG, we just went our separate ways. Nothing like you make it out to be.

There were other factors too. Like when you made all these empty promises to the so-called Friendship and Honor Romanians and The Dark Side Wolves. That was probably 10 to 15 percent of our voting power that we lost from that alone.

I was there. I helped break your little power play. I don't need a history lesson. CG left you and your coalition died. Helped along by the rest of the country squashing you over and over.

That's all Reagan did was forget. His wacky wife too.

With all due respect to CG, I think you exaggerate his importance at this time. CG is a powerful and influential player now, and he was with the RLC merger, but in AFA he wasn't commanding legions that just left upon command. Was basically a member of the team.

You chipped off some of our auxiliary support, and then most of the Serbs left... and it all fell apart from there between your friend Fluffer's bots, and the HUGE cadre of foreigners you imported to PTO us because you were butthurt we did to you one time what you did to us many.

-I was also always -

Silly Freedom Party cried long and hard over a blacklisting of it's members ....

now they want to blacklist someone else

I think blacklisting serves a purpose in limited situations.

This is one of them. I do believe this could be reverted to a censure, but as others have said, there's been no remorse from the player. Nothing that would indicate he wouldn't do it again. The ball is in his court now.

When people show you who they are, believe them the first time.