Happy 17 may (Food For Everyone) , Norway's National Day!

Happy 17 May. It is Norway's national Day!


Comment below to get Food. Everyone who comments might get 2k Q2 food, And as usually extra for eNorwegian Citizens!

(Thanks to Xibbard who sponsored a lot of food)

Here are the answers from the quiz, along with some info.


1. What does our National day celebrate?


2. Which Year did Norway gain Independence?


3) Which Year was Norway's Constitution signed?

So this is kind of fun. Our National day is Constitution Day, That was signed 17. May 1814.

Since 1397 Norway had been part of Kalmar union, which included all of Scandinavian/Nordic regions.
In 1523 the union fell apart as Sweden left it, Norway stayed under control of Denmark.

In 1814, due to the Napoleonic Wars Denmark was Forced to cede Norway to Sweden. (Norwegians were horrified Norway would be traded like that, with the big world powers approval.)
During this Norway tried for Independence, and signed our constitution. For a while even the Crown Prince of Denmark agreed to be King for an independent Norway.

Following a short war with Sweden, Norway surrendered and became under a union with Sweden, but due to all this Norway was allowed to keep some autonomy including our own constitution.
This is apparently the last War Sweden ever had.

One problem with the transfer is Denmark kept the NORWEGIAN territories of Iceland and Greenland(still under Denmark), but Norway had to give up those long ago.

( https://en.wikipedia.org/wiki/Union_Dissolution_Day this is considered Independence Day, but i see google tells me 1814.
So might be some disagreements there And Seems some consider National day = Independance day. )

Our constitution is the 3 oldest in the world (after USA and maybe Poland, seeing some different info on that too).

4 ) What is the Norwegian 17.May Celebration known for?


5. After our independence, Who Became King of Norway?

Although
D ) A descent Of the old Norwegian King.
Might also be correct.


Norwegian National day is known for its Children's Parade.
We do not have a Military parade like many countries do, although there are some things like firing of cannons as a Salute.

It is a day for the Children with some other events, and of Course lots of Ice Cream and Hot Dogs!

(Unfortunately not quite the same this year because of Corona )


When we gained independence, Norway wanted a king. The Danish Prince was chosen, The brother of the future king of Denmark.
He was very reluctant to become King, and wanted assurance that the Norwegian people wanted him as King.
So there was a referendum on it, and The Norwegian people elected him king.

So Norway(maybe the only in the World) actually have an Elected Royal family.
Prince Carl of Denmark took the name Haakon VII of Norway . He became king of Norway while his Grandfather was king of Denmark,
thereby becoming King of Norway before his brother, and even his father had become King of Denmark.

And he might actually be a descent of the old Norwegian kings, as would the Danish Royal family be.
If you can keep track of these family lines:


Hope you enjoyed this. 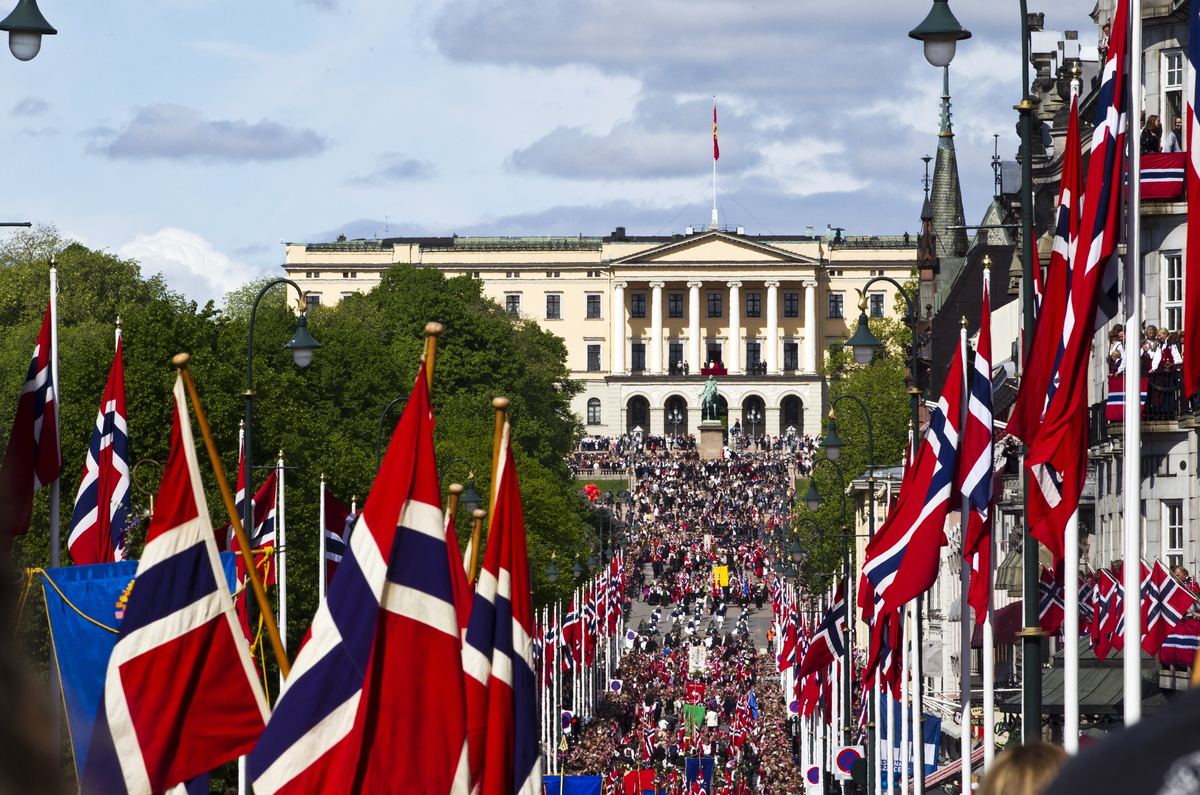 Been a memorable day. As the normal celebration couldn't take place, there has been a lot of other things happening.

Where i live, a group of people had their own little parade in the street. There was an extra Cannon Salute, before "all" of Norway sang the national anthem. And there was a boat parade, and even a Car parade of Minis.

And the royal family was still out on the balcony for it and as the normal parade couldn't take place, The king took a drive through Oslo instead and visited the hospital, in their iconic royal Cars. (This had mostly kept secret so there wouldn't be too many people in the streets.) 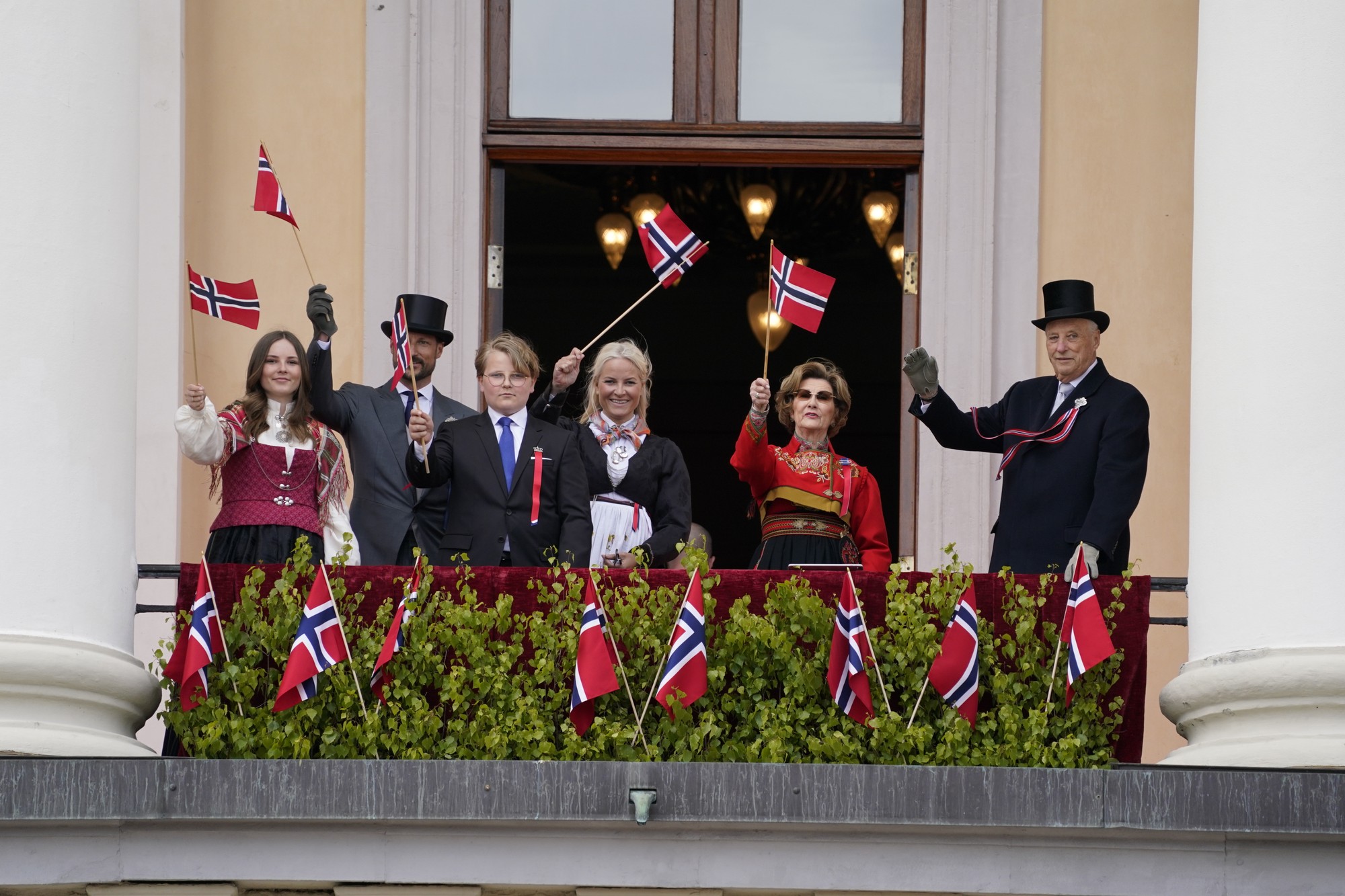 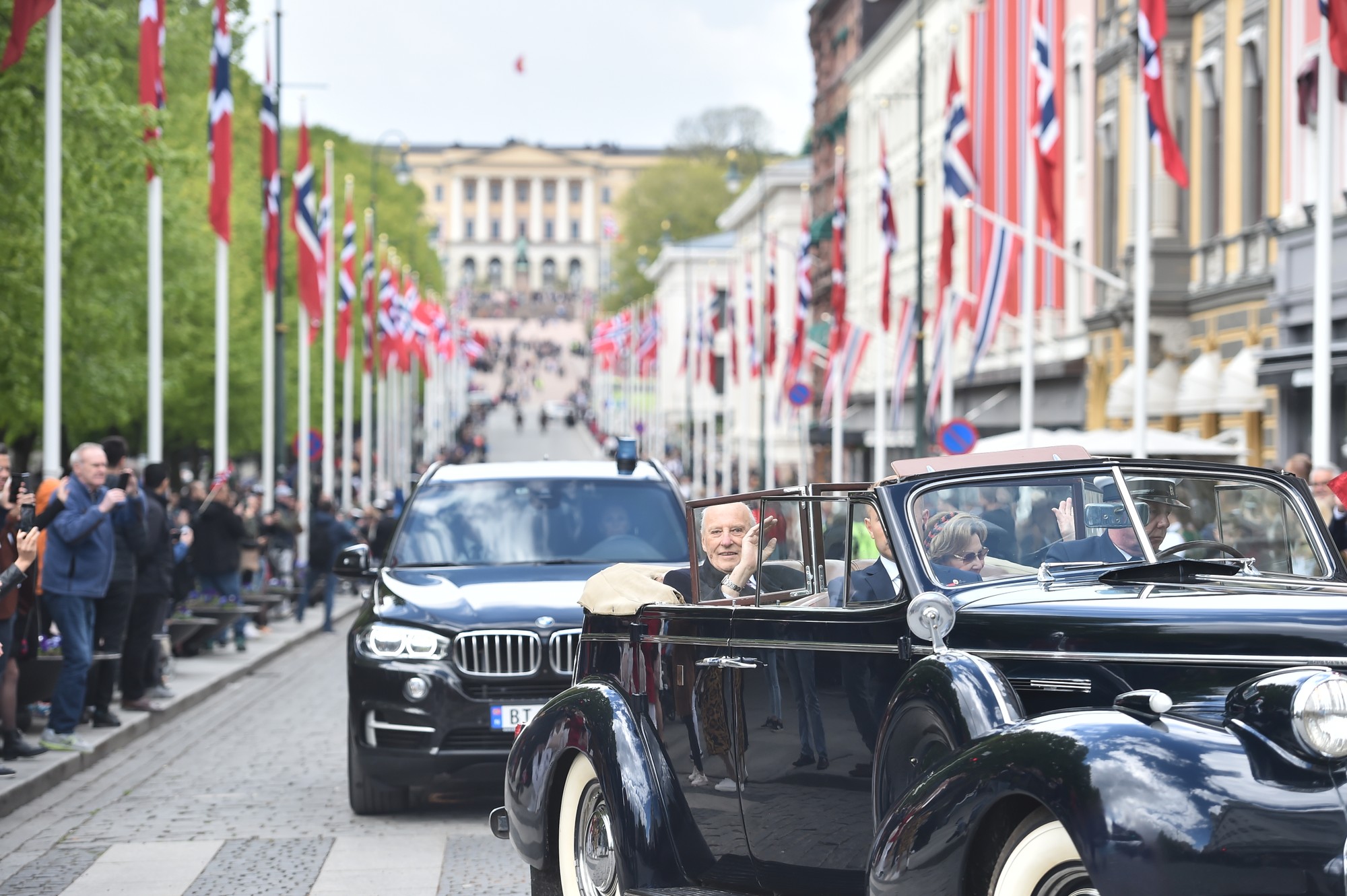 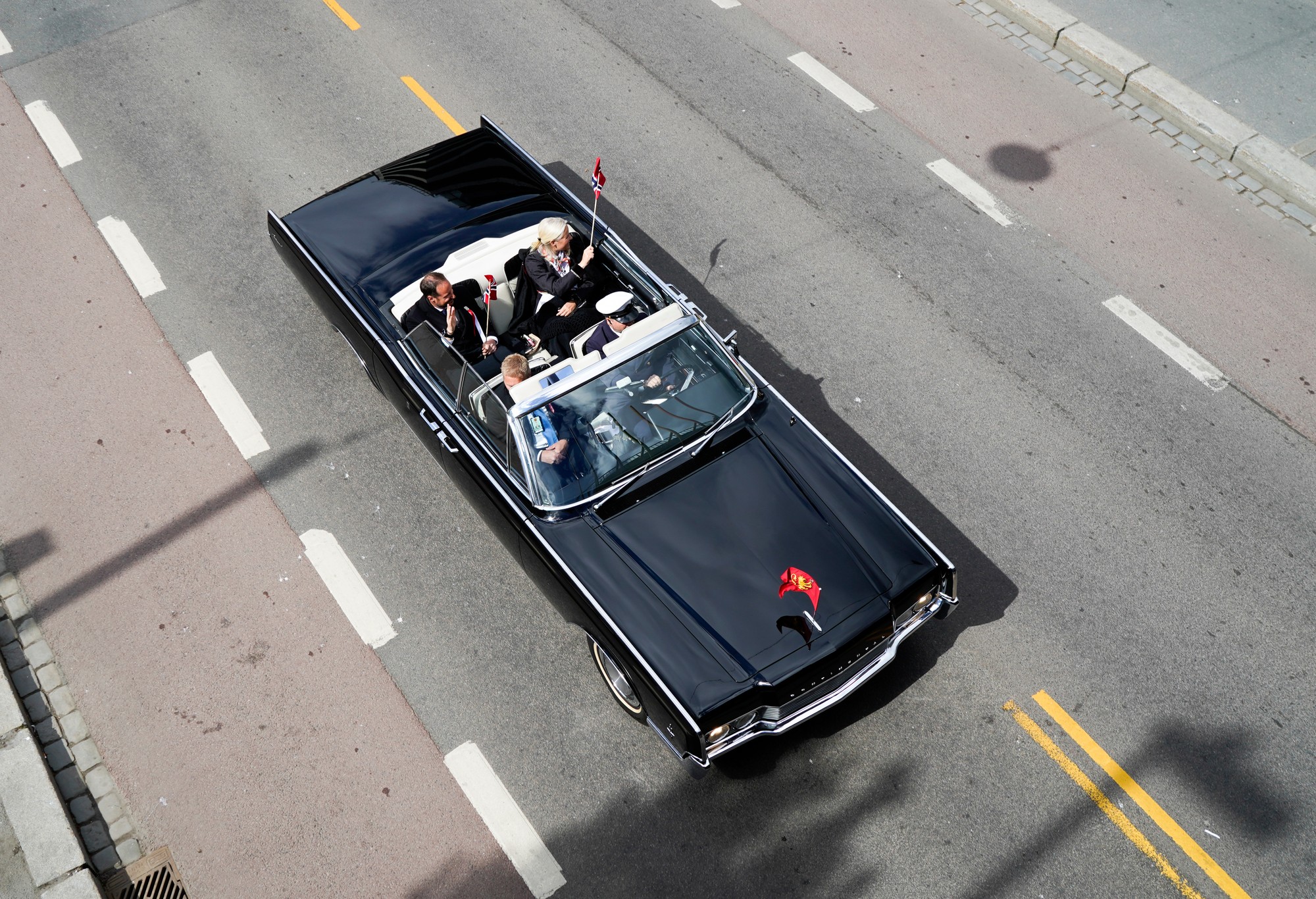 Should have kept the Union, but under Norway.

At least we should thank Norway for the delivery of the much needed foreign assistance to developing nations like Sweden.

However, a big no to monarchy.

You know the reason Swedish king wanted/claimed Norway, was because they had just lost Finland. 😛

Yup, and thanks to those events you got a constitution and we got autonomy. Not a terrible "trade" in the end. 😛

Very interesting. I read the other day that Norwegians eat between 13-16 million hotdogs on Constitution Day alone! That is crazy. That’s 2.5 per person. Although I called eNorway home for 7 years I hope to visit real life Norway one day. Beautiful country, amazing people and rich in history and culture. Heddal Stave Church is on my bucket list!

I know celebrations this year must will be very minimal but I hope you can still enjoy the day. I actually live across the street from Norway House in my city and I’m used to sitting on my balcony and watching the parade every year so I’m sad that won’t happen again this year. Happy Constitution Day everyone!

Happy national day! and thanks for the food 🙂

''Comment below to get Food. Everyone who comments might get 2k Q2 food, And as usually extra for eNorwegian Citizens!'' Hans, You mean MY food?!. 😛

Serious Question: How can Norway have a constitution, While NOT independent?!. That would have to be ''Made'' by whomever Norway was part of, Meaning (To me), That when Norway got independent, They would need a new constitution, Since the previous one was not of Norway.

Norway got its Constitution in 1814. Until then we was a part of the Danish Kingdom, which did not had an constitution, in our sense of term, it was an absolute monarchy. Denmark-Norway was on the napoleonic side and King of Denmark, as defeated part, was forced to cede Norway to Sweden. During the winter/spring of 1814, influential persons in Norway took the initiative and convened an Counstitutional Assembly. They finished the New Constitution on May 17th, and was influenced by principles from both French and American Constitutions. The swedish leader (the Crown Prince) was occupied by other commitments on the continent. He didnt have the force in situ to supress this "rebellion" in Norway. Later on, in autumn 1814, he was back in Scandinavia and started a war against the New Norwegian Kingdom. But the Crown Prince was in uncertain position in Sweden, so if he accepted the New Consttitution (with some adjustments) he could regard Norway as a "plan B" if he himself get deposed from Swedish power. This is one among several theories. But perhaps also because, also the swedes was tired of war. And both politically and military, in long term it would be very challenging for the swedes to hold on Power against an unified and hostile Norwegian Nation. And mountanius Norway is not an easy country to conquer! It was realpolitik. So the union With Sweden get created, formally as an personal union, one King but two constitutions. But later on, when the Crown Prince become king, he tried, step by step, to merge this two nations. But the Norwegians want to keep its own Constitution, so the attempts failed. And here we are on the road toward 1905.....

Thank you Zinitus!. I never would imagine that Norway was part of Lego-World.. 😛

Yes as i wrote in the article.

Keep in mind; Norway was a Country/kingdom since year 800, but not always independent one.

Under Sweden we were allowed to keep the constitution and some autonomy(or maybe a lot). Only a few things were changed in the constitutions to allow that, and then parliament "elected" the Swedish king and some other things so they could justify it all.

😮 the children's parade instead of military is really interesting. Its create patriotism since younger age , the kids are the future rather than war.

Good competition, Hans Erik!
No food needed for me, it will be very much cakes and hot dogs during the day anyway (according to Joshua`s statistic reserach)

that explains why mine keeps disappearing

This article is part of The Chained Newspapers. If you enjoy reading please consider subscribing your erep friends newspaper's and joining the movement.TCN & V+E+C+S 2020 © ® ♥ ™