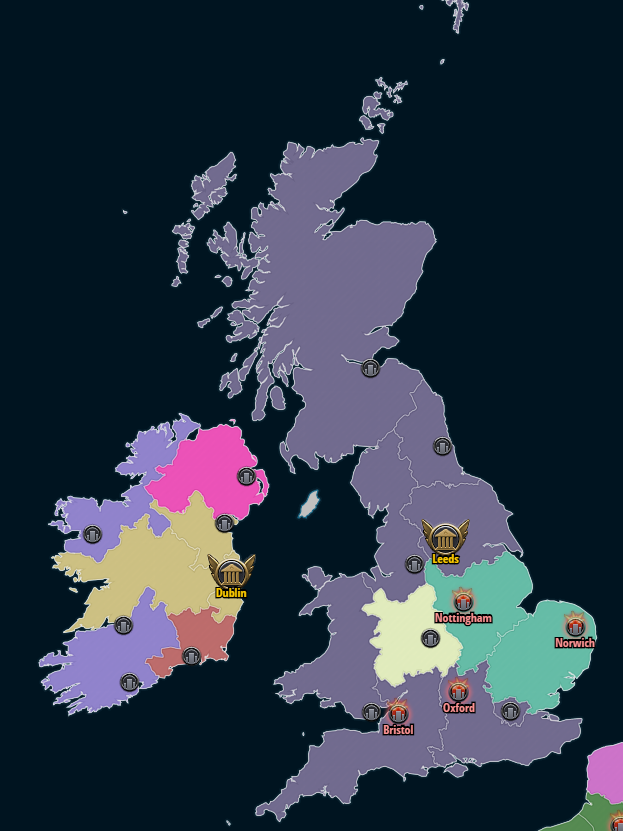 Few updates to go through so I’ll try and keep things brief(ish). Cheers to mwc for the bruising election! Appears the Alfa smears of electing putin and maybot was just enough to get it in the bag myself...

I’ve prodded Hungary for the £163,996 owed. Any suggestions on what to actually spend it on…. would be appreciated 😛

Portugal proposed a NE on Turkey yesterday. This prompted a request to temporarily release Scotland and cut off the border with Newfoundland.

We’ve now liberated Scotland and are waiting for Turkey’s DoW to shift them back where we can propose peace and enjoy maximum weapons productivity again.

This doesn’t really solve the original cause of Portugal sitting in Canada but that is not our problem to solve.

Alfa has stepped down as Speaker, triggering fresh elections. The Speakership is up for grabs to any eUK Citizen but only MPs may vote. You can publicly declare your candidacy or drop me a message.

The role of the Speaker is to open and coordinate Congress, and (gently) moderate discussion to stay on topic. Part of this is encouraging MPs to engage in debate rather than immediately putting things to vote, where they will fail.

We are deliberately losing our direct battles with Chile and Hungary; a day after the region has been conquered it becomes available to RW. We will (usually) win this so grabbing one of the 10 slots can be a bit cutthroat - keep an eye on posts and on the region’s cooldown.


As for anything else, bare with me as I try and remember what I’ve forgotten again…

We have to keep turkeys for next Christmas, where do you think we will get them from after Brexit?

Publishing the opening timings for RWs would be hugely useful (if these can be reliably calculated/predicted).

Continuing the Alfa-led 'prizes for activity' system is an excellent way of spending Government funds - undoubtedly better than blowing cash on a pyrrhic airstrike on Singapore....

if you're prepared to get on telegram cc you're more than welcome to help :3

yes nice start to the term

No Dry January for me