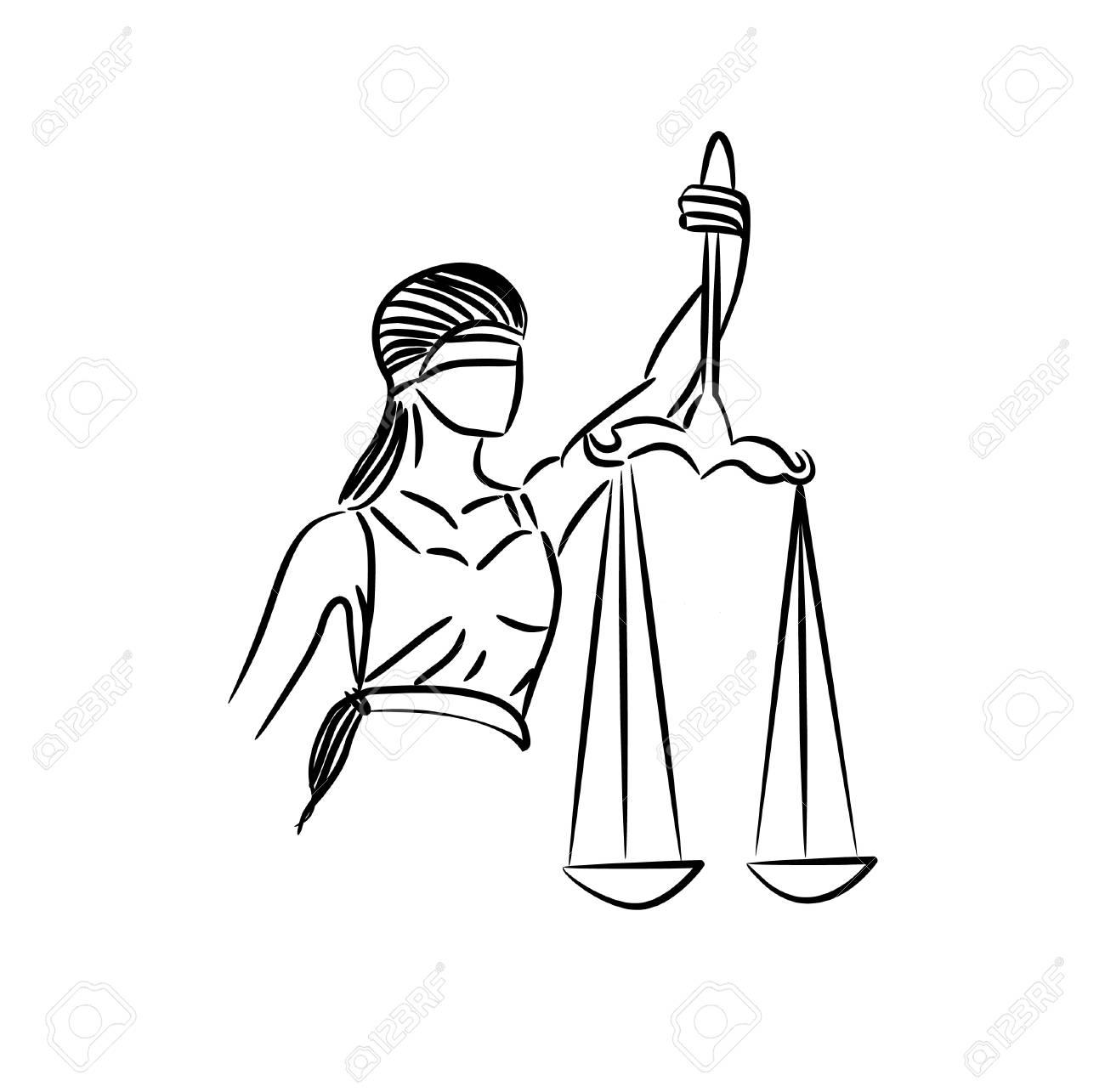 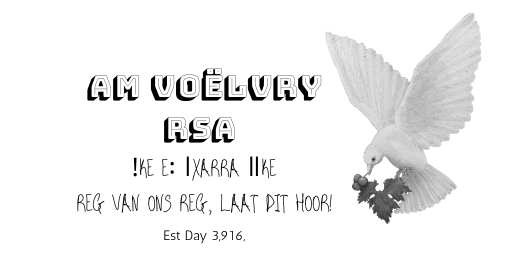 “... and all you listeners out there in the RSA, this is Jeffrey Smyman of AM Voëlvry! I’m coming to you live from Dublin, Ireland where it's all happening right now. There was some excitement with the attempted assassination of the Irish Civ Boss turned Presidente Gerald O'Flaherty. Outsider reports say he's doing well and still ordering his Civ mob around but we cannot confirm... The trial of Captain Robin Tideman formerly of E.L.F has just ended and word is he has been extradited to his home region now under the jurisdiction of another Civ boss turned President, the former E.L.F Major Sander Sepp of the Baltic Confederation for judgment. AM Voëlvry gives it straight, it’s not likely to be a good outcome for Tideman, who once came face to face with the infamous Black Hound and lived to tell the tale. The Civ public are panicked, almost feral. All Prios have fled the scene. The Rasa Judges are preparing for the next trial on their slate amidst the mayhem.

The judge panel includes one Joe Quigley, a Russian diplomat Nastya Mika and a South African, the highly acclaimed Dr Allison Macallistar-Payne, a genius medical research technician from Podaffer of all places, considered first in her field in nano-biotechnoliogy. Doctor Macallister-Payne’s work has helped millions of Type 4 addicts with her new chemical compound commonly referred to as the Gil Pill, co-developed by her husband Dr. Macallistar and perfected by her loyal staff. get excited and stay tuned, because AM Voëlvry has secured an interview with the lovely doctor! AM Voëlvry will be back after this new song by the Digeridon’ts, so stay tuned, you’re listening to AM Voelvry, the free wave riding straight from Stellenbosch in the Cape Winelands all the way to the Zambezi River and beyond. Keep that dial tuned to AM Voëlvry!”

Gráinne was brought into the court looking terrified. She’d been locked up so long she looked like a crude impression of the woman I once knew as a friend. She perked up when she saw me sitting there in a Judges chair. I stared down at her with disgust, shameful as that may be. This woman had almost caused my son to be motherless. Friendship meant nothing to her, she was a phantom of the person I once knew. As far as I was concerned, I was simply a tool to be used for her purposes. To my left I saw Joe, he’d a similar expression written on his face. Raven was shifting in her seat looking extremely uncomfortable, her eyes were darting around looking anywhere but at the prisoner. I looked out at the gallery which was packed with Civs and the media. Our president Gerald O'Flaherty was back in his seat in the front row looking a bit pale but determined to be here for the rest of the proceedings. What a boss. The media may have made a monster out of him but he was living up to the best of his reputation.

Jackdaw banged his gavel to quiet the masses. "Order! The trial of Gráinne Sweeney will now begin!" he barked, nodding his head at our stand in prosecutors, Gad and Flinch. Gad stepped forward and faced the prisoner and the crowd of Civs and media. "Gráinne Sweeney you are charged with collusion with the enemy, namely the defeated Goshawk Military Organisation and its sponsor. Additionally you are charged with aiding in the attempted escape of Delta Unit from this s2`1 facility during which two volunteers were almost killed, namely Commander Claire O'Malley and 2nd Commander Joe Quigley. How do you plead?" The whole gallery erupted in anger. “Nastya! How can you acc…” Joe banged his gavel down hard to try bring order but no one was listening. I looked down to see Gráinne burst into tears and collapse as a shot rang out. She fell forward with blood blooming from her shoulder. Without thinking I was out of my seat and running towards her. All the President's men along with Rasa and Brigade soldiers held the crowd back as I bent over her, trying my hardest to keep her conscious.

Lord, oh my lord history is underway here today folks! This is your favorite Welsh Comms-caster Cherry Jones coming to you live from Dublin’s fair city! It is all going down here at Liberty Hall folks and we have had some extreme drama today, none of it pretty! First off, the attempted assassination of our newly elected President Gerald O’Flaherty! Cool your jets, our sources say he’s in a stable condition and all of us here at AM Athlone wish him a speedy recovery.


And as if to top all of this chaos the infamous Journo turned spy, Ms. Gráinne Sweeney has also been shot as her trial begins! Conspiracy!? Power plots managed by the remnants of Goshawk!? Do not switch that dial folks, stay tuned for more trial of the century updates! *Ugh* Ahem, up next is a tune by Lylo and the Banjaxed. We'll be bringing all the action to you live as it happens but first we’ve to play this... This track is called “I’ll be back for X-mas Darling.” Christ, are we off!? G*d almighty if I have to peddle this awful panderin’ Jackeen shite a second longer I’ll… Ha! Still on the air. Ah! Well... This is a lovely new Christmas tune by… *pfft* you know what? I qui...


I leaned back in my chair and waited for the pandemonium to settle down. Raven had ducked down behind her podium and looked uncharacteristically shaken, while my other fellow judge Dr Ali was down below working on our injured defendant. Always running towards danger these days, our doctor was so different from when we first met, she’d learned all the bad habits of Rasa Blank. I could see Brigade soldiers moving among the mass of Civs and Media settling the crowd down with a few choice words and more than a few hard knocks. Ali finished patching Gráinne up and left the rest of her care to Brigade medics. The Doctor straightened herself up from the ground, looking up directly at me. Our defendant remained seated on the floor. "She okay enough for this trial to continue?" I asked leaning over my pulpit to talk to her while giving Raven a hard look as she hadn't moved back up to her seat. "She's fine just a flesh wound, nothing serious." Ali replied staring out into the crowd. Raven scrambled back into her seat but looked like she was going to be sick. I spotted the defendant Gráinne pull at Dr Ali and when she was ignored I spotted she had something to say. I may be a thick grunt but I know the difference between an appeal and a desperate, last ditch plea. Raven looked at me with her cold, white-blue eyes, almost telepathically begging me not to ask anything further.

Silence fell over the room and I banged my gavel again. "What do you have to say for yourself Ms. Sweeney?" She held her shoulder for maximum effect. “Hurry up Ms. Sweeney, before we’re all shot.” The gallery laughed nervously. "I was coerced into doing as they wanted, I had no choice in the matter. Both in the giving of the information and the attempted escape. They would have killed me if I didn't go along with it." she said standing up and looking up at us. She was as pale as a glass of milk. A sideways glance at Raven gave me the impression she was going to be sick. "Do you have any proof of this alleged coercion?" Ali asked sharply beside me. "No. They keep in the shadows... They don't show..."

I leaned back and looked at my fellow judges. She'd pretty much admitted wrong doing, making our job easier. "Is there anyone present Ms. Sweeney that you believe could alter our proceedings at this time?" I asked leaning forward and looking into her tear stained face. She glanced in Raven's direction for a while. "Gráinne?" Ali spoke up sharply next to me. "No, not at the moment." she said swinging her head to look me in the eyes and standing herself up straighter, flinching slightly as she moved her injured shoulder. Gad and Flinch both shook their heads at the question in my eyes. They’d no answer for me. "Court is adjourned. We'll retire to deliberate." I stated, banging the gavel before leaving my seat with the other judges to the side room. The good Doctor Macalister-Payne seemed upset and hurt and Ms. Nastya Mik-ham-slama-whama-voch or as I knew her, Raven, stared into space like she’d die if she moved an inch. The main event was coming up and the Civ/Media/Military horde were all elbowing in to see their justice past down. The most vile, savage, inhuman Goshawk Unit. Dead Petrov’s pet snipers, Delta Unit. This day simply wouldn’t end.

Thank you for reading! So this is the last season...
Started back in Day 4,083
Thanks to everyone who has followed our tale this far.

If you're an eSwiss Citizen consider joining our Political Party...