ZA Chapter 2: I REFUSE TO GIVE UP

I REFUSE TO GIVE UP.


If I go outside in the dark, my brains are zombie food. And I don’t want to think about what would happen to my dog, BD, when he tries to defend me.


Nightly, chunks of my adobe home are torn away by a horde that seems to be growing. They grumble and growl and make a strange cry, like a cross between a roar and a scream- like someone is killing a lion. And of course, BD barks. There has been little sleep.


I’ve had no news from the outside world. The radio is just static. Still, I check the dial on both bands every day around noon. No one answers their phone, and there is no traffic.


Yesterday I put calls out on every channel on my fire department radio. No one answered, but some erratic noise on the State Fire channel gives me some hope. I’ll keep checking SF just after sunset.

I still own the day. I need to use every daylight moment toward survival. And I am not without resources.


This house never had running water. I use rainwater for washing and the dog’s drinking water. I have always hauled water on random trips to work or town- but there is a 1000 L pod filled with potable water in one of the rooms I don’t use. Unfortunately, that’s an undefendable space, so I’ll have to transfer the water somehow.


There’s an outhouse that I can use during the day. Nights, a bucket will have to suffice. Gross but do-able.


I have 100 watts of solar power, which isn’t much. So long as the horde doesn’t wreck the wiring, I can keep tools and devices charged.


The light works, but it seems but it seems a bad idea to draw attention- would the horde come to it like bugs? Or should I have it on sometimes, as a beacon for any remaining humans? It’s a tough call… For now, I’ll let the dark stay dark.


I heat with a woodstove, and I’ve started transferring my woodpile into the storage room. The horde has some idea of tool use: They’ve been throwing firewood at any exposed glass. It seems they either think or remember something of their old world.


My next critical mission is pulling metal off the roofs of the rooms I don’t use, to reinforce my space. God, I am building a bunker here. 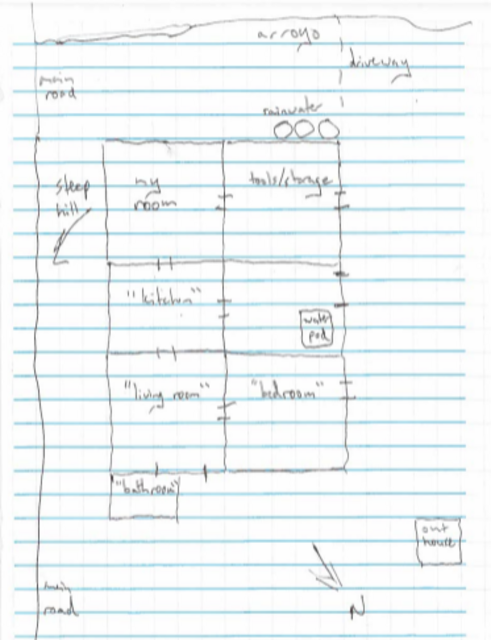 Schematic of my house


I just want to drive away. But what happens when I run out of fuel?


My weaponry is woefully inadequate. I sold my guns to help pay for my last intercontinental move. I have my bow, but only a dozen good broadheads. I can work on converting my practice arrows somehow- maybe I can break up shaving blades to get the razors.


Realistically, the bow will not be great for close fighting against large numbers. Otherwise, it’s pretty much hand tools. And I am of course worrying about groceries.


It’s almost full dark now. Time to see if I can raise anyone on State Fire, then put in earplugs against the maddening noise. A change in BD’s bark will wake me if need be. If I can sleep…


To be continued- I hope.