Macedonia recently started a war against, pretty much everyone. As first we managed to land on Chile to help our friends from Italy get free from the hostile occupation that lasted for more than 3 months. After kicking Chile, Albania and Montenegro were next ones to leave. In the same time we had open war with Croatia, which by today lasts for 5 days. We managed to win battle after battle against all and today, on day 4,406 we have successfully conquered Croatian core, food production region South Dalmatia.

EDIT: Forgot to mention the war with Brazil. Even though I didn't want it to happen, since I see Brazil as our friend, it had to. Brazil took role in few operations against our friends recently and we had no other choice.

It was a good fight. Rapadura is sweet, but not soft. Brazil o7 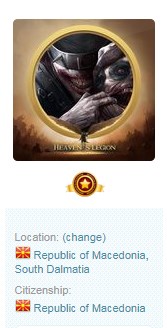 I can say that, even knowing this is temporary, it's a great achievement and motivation for all of us to keep fighting. We had our cores wiped for more than eight months. We didn't have a chance to open a RW for the last two months. We were on the edge of being wiped few weeks ago when Croatia and Turkey sent airstrikes together on us, and today, here we are, kicking all out of our grounds and successfully taking the first core region of our enemies, which is no other but the core region of the empire.

Before all, I would like to congratulate my people and thank them for staying together in our hardest times. They followed my orders over the past year no matter how bad or illogical some moves were 😂

Next, I would like to thank all of our friends that took part in this epic journey. We shared the pain together in the last months, but now it's time to celebrate together. This is not only Macedonian victory, but our mutual success as a result of the hours we spent planning, and nights we stayed late tanking.

From the bottom of my heart I thank you all!

congrats Macedonia! and all your allies!

Despite all the attempts to run, you managed to catch them all!!

fyrom in my heart, djani in my head

What a stunning Achievement
Congratulations to all of our Brave Soldiers in Mecdonia .
In fact with this Admirable moves any soldieds at Your Allies Regions received a Golden Priceless pack! Who called Honor Pack !
Hail Mecdonia
Hail Hydra
Hail Asteria
o7

Serbia is next to enter their core, as soon as they stop running away from us 😃

This guy is just pretending to be Goldennn, theres not a single insult in this article and its wirtten in a respectful spirit. Whos behind it?!

I tried to google translate Stole from Macedonian to North Macedonian and it translated it to GoldeNNN, what?

We will meet again o7

All pride to MKD

V. thanks for your work o7